Tony Emeka is the CEO of Ma Media Ltd, the firm behind the largest and No. 1 blockchain and cryptocurrency media outfit in Africa. With his vision and foresight in predicting the needs in businesses, he setup CryptoTv plus to give the voice of the media to blockchain firms, entrepreneurs and business leaders help them reach out to the vast market available for their products and services.

Tony Emeka is a media professional with the entrepreneurial passion burning within him has with the launch of CryptoTv plus in 2018, also released several other products/programme such as the Blockchain and Cryptocurrency Awareness Tour (BCAT) which has been able to expose upto twelve thousand Nigerians across the country to the revolutionary technology and its varied applications.

It was launched in 2019. Knowing the effort leaders in the cryptocurrency industry are working tireless to release defining products, Tony also launched the BUIDL Africa program with the singular aim of recognizing, rewarding and appreciating the contributions of entrepreneurs in the industry.

Amongst his several notable achievements are the launch the first ever cryptocurrency focused comic show which is called Crypto Roast. A program which seeks to explore happenings in the industry in comic ways. The program has had record numbers in terms of engagements. Under the leadership of Tony Emeka, the launch of the first ever early morning show that explores the exiting and hot topics in the blockchain industry at every Monday morning by 8:00, an online Radio focused on Blockchain and Cryptocurrency etc.

Mr. Tony Emeka as an individual that has traveled several countries in almost all the continents has brought with him experience, expertise and deep knowledge and commitment to passionately use his skills and competences to continually lead, empower, mentor and guide young people in the achievement of their goals. He has led a record number of individuals under him with impressive results; mentoring young people, empowering them both financially, morally and leadership values.

As a skilled business man, Mr. Tony Emeka has built systems that run without much human intervention. He’s also the Founder of the Emeka Tony Onuorah Foundation, where he caters for the needs of indigent children helping them to return and remain in schools by providing the needed provisions.

Mr. Tony Emeka is currently working on defining products that will take both the local and global cryptocurrency industry by storm.

The Importance of Blockchain and Cryptocurrency in Nigeria

Nigeria is a country rich in diversity and natural resources, but most of its greatness is from its teeming youthful population. The country is the largest black nation by population size in the world and it holds key market for various unique products and services and also presents an inroad into other markets.

Blockchain technology was developed by the individual or group of individuals known as Satoshi Nakamoto.

This invention was the basis of the Bitcoin cryptocurrency which has dramatically redefined the world of finance as we have come to know today. With the creation of the internet, value could easily be sent across the internet with both parties retaining the same quality and quantity of the value sent.

This was a serious issue with the early attempt to create a currency that could run on the internet. This problem was apparently solved by the creator of Bitcoin. The novel innovation that has come to stay and present fascination solutions to varied societal challenges.

As a base layer technology, blockchain technology provides a technological foundation upon which crucial societal solutions can be experimented, developed and deployed. The blockchain technology has the following features which makes them very much suitable and important to proffering solutions to local challenges. These are Increased security, Transparency, Speed, Low cost, efficiency etc.

Nigeria is a country with lots of challenging situations, issues etc and these can be mitigated and total solved by exploiting inherent features in the blockchain technology both in the private and public sector. Blockchain technology holds importance to the Nigerian society and below are some of the ways it can be adopted and implemented in the Nigeria state.

A trusted and unified identity system

Blockchain technology can be implemented to create a unique identifying document that can be used to access all resources of the state. This eliminates the cost of using various access credentials or ID to different systems.

For example, with the adoption of Blockchain technology, a smart Identity System could be created to issue a Smart ID to every citizen and this ID could be used for all activities with interoperability to social services, banking services, healthcare etc.

The blockchain technology can be adopted and implemented in the Nigerian electoral system. There has been clamor e-voting in Nigeria considering the challenges which had arisen over the years due to physically going out to vote. The major drawback to the implementation of e-voting has been not including political will but the concerns over hacking the system and changing voters by and in favour of certain persons.

This concern is largely to a limited extent justified however, blockchain technology presents a fascinating solution to this problem.

With its unique tamper proof inherent feature, records or votes casted by voters in a blockchain powered e-voting system cannot be changed. Voters can also vote from the comfort of their homes and thus eliminates the violence that has been recorded in previous elections, reduce cost and ensure faster electoral exercises. This no doubt works hand in hand with a unified identity system as mentioned above.

Across the various industries in Nigeria, there has been at least one record of product counterfeited. This is a serious concern as fake products could be and has been consumed with fatal consequences. Blockchain technology can help to prevent counterfeiting by applying a unique identifier to each product which is easily traceable and verifiable.

This helps to easily eliminate or mitigate fake products on sale in the market. As a technology with public or easily traceable records entries, Blockchain technology allows a simple and efficient inventory tracking solution that anyone from anywhere with the required access (if any) can easily identify the constituent of a particular product, the movement or transit history. This is particularly imperative for traceability and audit.

The reduction in Administrative Cost and Efficient Utilization of Resources

Blockchain technology as an open system, a record ledger that anyone (with the required access) can access, allows for an efficient utilization of resources, reduces time spent on authorization as every record is publicly available and accessible. It uniquely reduces cost of administration by eliminating wasteful intermediaries that could also reduce the speed of execution. In the public sector, especially with the recent distribution of COVID-19 relief, by using blockchain powered solutions, reliefs could be easily distributed across the country with every party monitoring the distribution flow.

Bitcoin has proven itself to be a success in its role in ushering the financial revolution. With the ability to send value across the world as a fraction of the cost when compared with traditional financial system, cryptocurrency has proven to be an efficient money transfer system. Also, Blockchain and by extension cryptocurrency can ensure an efficient financial system in the banking sector because it is faster, it records information securely and thus the integrity of banking records cannot be breached.

As a powerful nation, Nigeria also requires powerful solutions to its defining issues. And by adopting blockchain technology, it can no doubt help to promote the nation by reducing cost, improving efficiency and generating more revenue as entrepreneurs begin building globally competitive solutions and businesses around the technology.

Tony Emeka is the Chief Executive Officer of Ma Media Ltd, owners of CryptoTV Plus 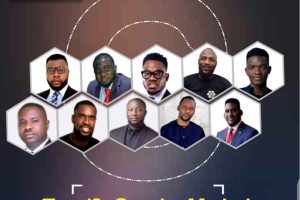