Grooming and ‘sending’ politicians play a special role within the infrastructure of power in almost every country in the world. It is a form of managed predestination of individuals who can be counted on to govern in a democracy. Americans have used it to create dynasties around business and political ventures.

The late Abner J. Mikva, who attained great heights in American politics, expected a warm handshake when he declared his intention to join a gubernatorial campaignteam in Chicago as a 22-year-old law student in 1948. The local ward leader looked at him intently and queried – “who sent you?” “Nobody sent me”, he answered. The ward leader closed his case, “We don’t want nobody that nobody sent”.

‘Who sent you’ has equally been the most important question in Nigerian politics—perhaps unwittingly so. But never has it got the formal structure, the professional touch and the broad-based purpose that Asiwaju Bola Tinubu, former governor of Lagos State and national leader of All Progressives Congress [APC], has made it to be.

He began a ‘school’ of development phases of political lifecycle from conceiving candidacies, forming and launching loyalists for purposes they have been schooled. This happens under guided parameters for everything in the process – from party primaries through the polls to governing and back to succession.

Tinubu has in place a regulated structure of candidate pipeline, which screens entrants for loyalty, electability and political and administrative skills and places each according to his worth. It is somewhat a school of discipleship, a mentorship model that holds forth the vision of the leadership.

That gives it a power more formidable than political opponents and non-conformists can easily comprehend. It is a network of people placed in high places and positions working to help who is sent to get there and who is not sent to fail.

The game is one of wits and strategy. The target is to steal the show before it is shown. Many people hardly recognize that primary elections are where the action is. Tinubu has shown repeatedly that he puts his best in it.

Most politicians also tend to handpick candidates for primaries when party congress is around the corner. Tinubu grooms’ candidacies from the very earliest stages. By the time the primaryballot is printed, the election is already won and lost.

It is a fact that Tinubu is playing a large and growing role in Nigerian politics in ‘sending’ candidates and consequently in determiningwho governs the nation. As the primary architect of the APC, he charted the course for changing the face of power, political opposition and leadership in this country.

As the intellectual force behind the scene, Tinubu is investing in people’s intellect, also creating opportunities for able people to express themselves and impact society. He has churned out governors and other public officers rated high in public opinion for their performances. It can be taken for granted that a typical Tinubu’s man will deliver on the job.

Five-star performance is however one of the two legs his man needs to advance on the ladder of power and position. The second is relationship. It has been proven time and again that the first is a subset of the second. When loyalty is tested and the second leg is broken, it takes limping to get ahead. Many do arrive late, faint and fade away along the way.

Tinubu’s unfolding vision of Nigerian politics traverses the eight years that he ruled in Lagos. He had the same vision of long-term relevance for the guys he picked to work with him while he was governor. The idea was not just to use them to work in his government; he gave them roots for the future – a future in which he has a role to play.

Tinubu seems to demonstrate that to be a political heavy weight isn’t a matter of what one can do all alone but the ability to build a team of loyalists up, down and across the political space. His top-ranking men include Professor Yemi Osinbajo, now the Vice President, who was his attorney general and commissioner for justice.

The number of Tinubu-following men has continued to grow at federal and south western state levels. It is estimated that up to 98 per cent of the members of the National Assembly from Lagos State have been coming from Tinubu’s camp since 1999.

The man’s advances in Nigeria’s political space aren’t happening by chance. They are coming from a mentorship model powered by loyalists set in pleasant places in the nation’s power infrastructure. It is working because it has a tested system of rewards for loyalists and caveats for deviants that work.

From a stronghold in Lagos through political investments afield the southwest to the realm of influence built at national level, Tinubu’s political architecture is taking its final shape. His spearheading of the emergence of President Muhammadu Buhari in 2015 and the second term return are all parts of the strategy of dispensing political graces that pay back in fine gold.

For whatever anybody may say about Tinubu, nobody can dispute the fact that he has many attributes that are worthy of emulation – the same attributes that not only attract large followership to him, but also make those that have benefitted from his political, economic and social benevolence to stick with him, in thick and thin. Those attributes account largely for his staying power and are responsible for the continued flourishing of what many see as a leadership school he systematically and painstakingly built, many years after he left public office.

It bears mentioning here that Tinubu’s brand of leadership and mentorship transcends politics. It cuts across all facets of life. That is to say that it is not only in politics that he has groomed people to positions of leadership. Some of those that have attained national recognition are people in the professions who had opportunity to serve him in different capacities. For instance, Fowler is not a politician, but rose to national prominence after acquitting himself creditably as Tinubu’s chief tax collector. Sunday Dare, the minister for sports, first worked for Tinubu as his chief of staff, and then…, before climbing to the second highest position in the Nigerian Communications Commission as… – with Tinubu’s support. Needless to say, the godfather had a hand in his emergence as a minister.

Tinubu’s generosity is unparalleled. His large army of die-hard supporters and loyalists on every layer of governance – from ward to national levels – are mostly those that have benefitted in one way or the other from his policy of ensuring there is something for everybody whose path crosses his, according to their worth. In doing so, he is fair to everyone.

Tinubu has a knack for sacrificing his personal interests for the general good of society – a level of selflessness that is rare to find in a society where personal interest overrides public interest.

When Ganiyu Solomon was aggrieved by his support for the emergence of Fashola as his successor for the post of governor of Lagos, he did the unimaginable by giving up the ticket of the party to run for the Lagos West Senatorial seat that he had won to Solomon. It is common knowledge that he had ambition to be Nigeria’s vice president under Muhammadu Buhari and actually looked forward to being made his running mate in the 2015 presidential election. But his interest in a better chance for the party at the polls and, above all, concern for the promotion of religious harmony in the country made him, a Muslim like Buhari, jettison his ambition to allow Osinbajo, a Christian, go for the job.

Tinubu has a large heart and capacity to forgive. It is the reason he has been able to accommodate those who wronged him at one time or the other and actually rebelled against him, but who have returned to his warm embrace and rehabilitation. The list includes Femi Pedro, his former deputy who fell out with him and left the then Action Congress of Nigeria to join the Peoples’ Democratic Party to run for the governorship of Lagos, only to return to him when he found out that the grass wasn’t greener on the other side. Others are Governor Kayode Fayemi of Ekiti and Fashola who were at a time having issues with him but who are now back as his allies.

Tinubu is a consummate political strategist, talent hunter and risk taker who believes in using dialogue to resolve knotty issues. He is de-tribalized, as evidenced in the fact that among those he has brought from obscurity to limelight are non-Yoruba from other parts of the country.

Criteria for Selection of his Top 10 Loyalists for this Publication

The Top10 Magazine reviewed a long list of Tinubu’s loyalists groomed and sent for various positions in federal and state governance in the course of this work. The list was narrowed down to the top 10 most-ranking loyalists on the basis of the national importance of the positions they held or still hold in line with the benchmark of our publication of celebrating top of the best 10 with emphasis on those with consistent progression from the state to the national level through his effort.

Even by this consideration, it was pretty difficult to exclude yet many top-ranking names in Tinubu’s political family. The editorial team of the magazine decided to count the victory of the top 10 as victory for the entire team.

It is not possible to determine who among Tinubu’s followers and disciples who were more loyal than others as we have no thermometer to gauge the level of their loyalty. Only the Asiwaju himself can determine that. In selecting the top 10 that grace the cover of this magazine, emphasis has been on those that rode on his back to national prominence. While the fact cannot be ignored that many of them are where they are today purely on merit, the point must be made that Tinubu gave them the foundation on which they built their career to the level of being discovered as fit for national service. 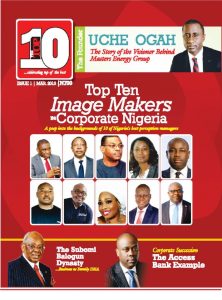