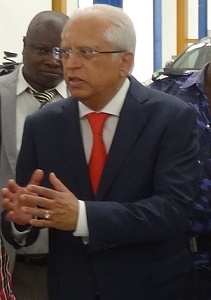 Mr. Ramesh Hathiramani, the Group’s chairman, an entrepreneur, commenced trading operations in the early 1970s. He later shifted from merchandise trading and ventured into pharmaceuticals – which turned out to be the seed of what was to become Dana Group of Companies. The group made its maiden advent in pharmaceuticals manufacturing in Nigeria in the mid 1980s.

From pharmaceuticals, it has become a large conglomerate with diversified operations into importation of industrial chemicals, affordable pharmaceuticals and surgicals, commodities, polyethylene, automobiles, electronics and white goods. The group commissioned a plastics manufacturing plant for household products in 2000, followed by the setting up of a pharmaceutical formulation plant and a table water bottling factory in 2003. The group also forayed into rice milling, using state-of-the-art food processing equipment. Dana Group acquired a steel rolling mill in Katsina in 2006 to produce debars and wire rods.

The group’s operating capacity is considered large enough to maintain the lead in industrial chemicals and pharmaceuticals for a very long time to come. It has diversified into food and automobile sectors and also ventured into the airline industry with the launch of Dana Air at the end of 2008, which operates daily scheduled and charter flights. It counts much on its sound financials as well as business vision for the group’s successful operations in every area of involvement.

From a wide spectrum of its operations, Dana Group has positively impacted the Nigerian economy by way of employment created directly and indirectly. The group has established records in humanitarian services and programmes committed to improving the lot of the under-privileged.

Ashmina Limited is recognized for providing high quality life-saving drugs and it manufactures intravenous fluids at its plant in Ibadan. From the same manufacturing plant, it produces sterile pharmaceuticals that spring forth its bottled table water. All the pharmaceutical products, along with other imported drugs and medical devices, are distributed by another subsidiary company in the group, Dana Drugs Limited, which maintains a large distribution network nationwide.

Dana Steel Mill, a member of Dana Group, produces re-enforcing and general-purpose steel from billets for construction. It has an installed capacity of 207,000 metric tonnes per annum. Dana Plast Limited, its plastic manufacturing subsidiary, began commercial production in 2000 and produces a range of finished plastic products.

The group’s business in the food business involves the imports of rice complemented by a state-of-the-art rice milling and processing unit in Lagos with a capacity of 90,000 metric tonnes per annum. Dana Group also offers shipping and clearing services.

Another subsidiary in the automobile business – Dana Cars and Services Limited, began operations in 2014 as the sole distributor of Renault brand of vehicles in Nigeria. It sales a wide range of passenger and commercial vehicles.

DANA Air Ltd is the group’s subsidiary in aviation services, with a target market of leisure and business travelers in Nigeria. It operates scheduled flights as well as charter services.

The power house generating the leadership ability of Dana Group to successfully foray into diversified fields is Mr. Jacky Hathiramani, the group’s managing director. He is credited with many business innovations that gave birth to new product lines. A graduate in Business Administration from European Business School of London, Hathiramani has strategically directed the group in building a formidable niche in Nigeria since 1997.