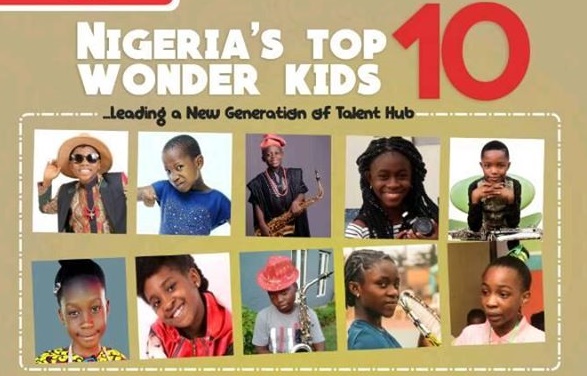 Welcome to the world of Nigeria’s wonder kids. Their kind is not found everywhere. That is because they are not the regular kids you find in every street corner engaged in the usual things children their age do, like playing on the sand; playing football on dusty streets (though some of the great footballers in history actually started playing on the streets), or climbing trees.

They make better use of their brains than engage in frivolities. That’s why success and stardom have started knocking on their doors at ages that could be considered unimaginable. And they have not even attained the age that could qualify them to be called youths. This means their best has yet to come, as they are still blooming, like the flowers they are.

These kids represent the new generation of Nigerian children that is set to bring a revolution to the country, in all areas of human endeavor. Never in the history of the country has it had such a rich collection of talents at kiddies’ level. What they have so far achieved in their different fields makes the achievements of some of the big names that preceded them pale into insignificance.

For instance, with whom, dead or alive, do you compare a 12-year old kid who developed an application that could help a lost child find his way out of danger? One may say she was aided by technology. But she doesn’t have exclusive access to technology. Others, including adults, do. But she has shown the difference between a run-of-the-mill human being and a genius.

In these days of rampant cases of missing children, made worse by the activities of kidnappers, an application that could help lost children find their way back home is more than a welcome development. It is one application that has come at the right time.

It is said that every human being is born with innate abilities to excel in more than one field. In other words, each person is gifted in more ways than one. While this may be true, it is hardly debatable that not every human being is able to utilize more than one talent. It takes something extraordinary to be able to demonstrate multi talents. Now, if you see an 11-year old who is a composer, singer, dancer, actor, and is specially gifted in fine arts, then you have come face-to-face with a wonder kid.

Nigerians are familiar with such big names like DeolaSagoe, ZiziCardow, Folake Folarin-Coker, Frank Oshodi and many others, in the fashion industry. They all started from the local scene and then went international.

What does one say of a 10-year old whose fame started abroad, not just because she is a fashion designer, but because she featured in the famous New York Fashion Week? The unique thing about this fashion prodigy is that she turned a seeming challenge – one that could have condemned many a child to a life of misery – into a huge opportunity. That is the stuff geniuses are made of, regardless of age. They see opportunities where others see challenges.

Comedy is an industry where male domination has inadvertently passed it off as a no-go area for women. Not so any longer. There are one or two women currently strutting the stage to compete with the Ali Babas and the Basketmouths of this country. Now there’s a new challenge.

And the challenge is not coming from the regular female comediennes. It is coming from a kid, a female, to be specific. Move over, Ali Baba. Hold your breath, Basketmouth. Watch your back, I go Dye. A new kid comedienne is on the block.

The emergence of wonder kids in all fields of endeavour is a positive development for the country. It is a sign that the country brims with talents that can take it to the next level of development, and enlist it in the club of nations that have recorded significant breakthroughs in science, arts and the humanities, for the advancement of mankind.

Nigeria has a Blaise Pascal, who began studying geometry at the age of 12 and developed the calculator at 19; a Wolfgang Mozart, who wrote his first symphony at eight; a Lawrence Bragg, the Australian physicist who won the Nobel Prize for Physics at the age of 25;  a Nadia Comeneci, the female Romanian gymnast who won a gold medal in gymnastics at the Montreal Olympics in 1976 at the age of 12, and a Michael Jackson, who joined his elder brothers to form the Jackson Five at the age of five and grew to become the greatest entertainer the world had ever seen. There could even be a Thomas Edison waiting to come to limelight.

In continuation of its tradition of celebrating the top of the best, those that have achieved the highest degrees of success in their chosen fields of endeavor, The Top 10 magazine has broken new grounds by turning its searchlight from adults and looking into the world of kids that eminently qualify to be described as the country’s wonders.

This edition is the second time the magazine threw nomination of personalities open to the public, its new practice of making everybody participate in the selection process.

It is recognition of the unique place of whiz kids in the new Nigeria that is emerging, and the attention they have continued to attract, that at the close of nomination, there were … votes cast for nominees.

It is doubtful if there would have been that number of votes in any of the past editions, if the public had been involved in the nomination process. So heavy was the traffic on the magazine’s website that it crashed on two occasions, especially as the closing date for nominations drew nearer. Only wonder kids could create such a phenomenon.