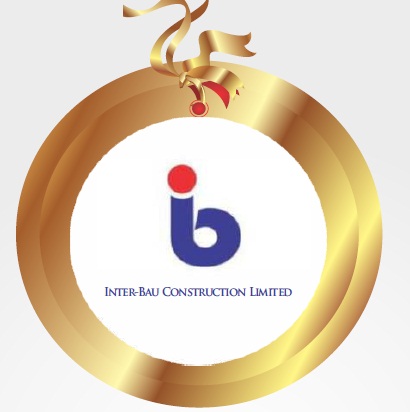 Few indigenous construction companies in Nigeria can match the expertise, experience, equipment and network of executed projects commanded by Inter-Bau.

A subsidiary of Landgold Holdings Limited, a well-known multifaceted business organization located in Ikoyi, Lagos, the company has responded to the unprecedented increase in civil engineering construction activities in Nigeria to develop and acquire wide-range facilities and equipment in order to enhance its performance in the construction industry of Nigeria.

This action has made Inter-Bau to become Nigeria’s foremost indigenous Construction Company. Its history dates back to the early eighties when it established its operational base in Asaba, the Delta State Capital. The company was thus founded in response to the increasing road, bridges, building construction, rehabilitation and maintenance demand in the country following the oil boom and the attendant growth in all sectors of the economy. Inter-Bau’s major areas of specialization include Civil/Highway Construction and Engineering Works, Building and Engineering Construction, Bridges and allied structures, Flood and Erosion Control Works, Architectural/Structural Design Works and Engineering Consultancy Services.

Inter-Bau is undoubtedly best known for high-quality roads, bridges, building construction and other related projects executed by the company.

Although it has grown and developed since those early days and many changes have taken place, its philosophy has remained constant: to be the foremost indigenous construction company with the most satisfied clients. This accounts for Inter-Bau’s continuous success.

The rationale for the choice of Asaba, the Delta state capital, as the operational base of Inter-Bau’s operational base was management’s strategic decision to establish an indigenous construction company that would compare favourably with the existing international ones with the main objective of servicing the Niger Delta, South – South and South – East region which needed sound infrastructural development. That decision has worked out correctly as the company’s investment has acted as a catalyst to the infrastructural development of the region.

Inter-Bau’s management team is made up of seasoned and qualified investment experts, industrialists and professionals, many of whom have grown with the organization and are part of the company’s culture of professionalism and high ethical standard. The team is headed by Sir (Dr) Nath Okechukwu, the company’s founder and board Chairman. A renowned business man and key player in the construction industry of nearly four decades, Okechukwu is an experienced administrator with diverse interest in business, insurance, Engineering consultancy. He has at various times held board appointments in notable Federal Government and private sector organizations like Central Water Transport Corporation (CWTC), Premium Securities Limited, etc. he has a wide knowledge of the socio-economic landscape of the country.

Inter-Bau has undertaken numerous construction contracts for Federal and State Governments and their agencies for almost four decades, some completed while others are ongoing. The experience the company has accumulated over the years has proved invaluable in its acquisition of abundant expertise in new technologies and methods of construction. This is why the company has the capability to execute any construction or rehabilitation project irrespective of magnitude or complexity.

The Company has effectively made its mark in the Building/Civil Engineering Construction sector of the economy. From its operational base at Asaba, Inter-Bau has undertaken road construction projects in the adjoining states of Anambra, Delta, Edo, Enugu, Rivers and Imo as well as Kogi state. A number of these completed projects were personally commissioned by the host Governors and Presidents. The most memorable occasion for Inter-Bau was the commissioning in one single day of three of its major road projects by President Olusegun Obasanjo during his January 2002 official visit to Delta State. It was unprecedented and a further confirmation that Inter-Bau has come a long way in the construction business which bears testimony to the company’s total commitment in responding positively to the aspirations of its clients.

Considerable investments in construction equipment, machinery, manpower and many years of experience have produced the high-quality roads, bridges, building and civil works projects executed by Inter-Bau. This has made the company a leading force among the indigenous and foreign construction companies in Nigeria today.

Inter-Bau Construction Limited is being conferred with the award of Indigenous construction company of the Year in recognition of its continuous adherence to quality and standardization in its project execution.