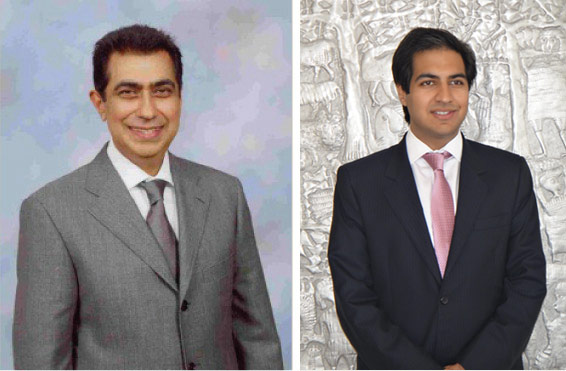 Mr. B. Mahtani is the head of the Mahtani business family in Nigeria and chairman, Churchgate group – a conglomerate with major operations in many sectors of the Nigerian economy. Mahtani is an accomplished industrialist and entrepreneur, a versatile and innovative businessman, who worked relentlessly toward the expansion of the family business in the 1970s & 80s and later assumed its control when he became the executive chairman of the Churchgate group. As part of his genuine desire to contribute meaningfully to Nigeria’s industrialization, he and his siblings have since become Nigerian citizens by naturalization and have continued to steer the affairs of the group’s operations, nurturing it to its present conglomerate status.

Mahtani is counted among the exclusive group of innovative and optimistic Nigerians tirelessly contributing towards the rapid development of the country through the establishment of widely diversified industries and service companies. He is quite convinced about the ability of Nigeria to emerge as an investment powerhouse as the vast potentials and opportunities in the country are harnessed to drive growth with development.

To a large extent, Mahtani’s burning desire for maximum contribution to economic development of Nigeria has been achieved but he isn’t resting on his oars yet. Churchgate group still has big plans to invest more in Nigeria in the years ahead. Mahtani has what it takes to invest rightly and profitably in the country – his wide knowledge of the Nigerian economy as well as his experience in the financial markets.

Mahtani’s contributions to Nigeria’s development effort has been recognized by government, having at various times been invited to give useful advice on policy matters. He was part of the Vision 2010 committee that produced the blueprint for Nigeria’s development plans to the year 2010. He is also a member of the vision 2020 committee.

Churchgate group commenced operations in Nigeria more than half a century ago in 1968 when the patriarch of the Mahtani family first arrived to establish a trading venture. Presently, the third generation of the family is running the business that has become one of the largest and most successful conglomerates involved in the industrial, financial, shipping and real estate sectors of the economy. The group is presently moving into the hospitality sector in its ground breaking journey that is focused on the growth driving activities in the emerging economy.

The group is reckoned to be one of the largest employers of labour in Nigeria, having become a household name from all the sectors where it has made considerable inroads. The group’s involvement in Nigerian banking began in 1988 with the founding of Chartered Bank Plc. Over a decade later, it established a second bank – Regent Bank Plc. In 2005, the two banks merged with IBTC and became IBTC Chartered Bank Plc. Churchgate continues to have a significant holding in Stanbic IBTC Plc after the Standard Bank of South Africa acquired 50.1% ownership. Further to that, the group has acquired core investor positions in two leading Nigerian banks.

Churchgate Group has a substantial presence in the manufacturing sector where its textile manufacturing was once rated the largest in Nigeria. It is a forerunner in the hollow glass bottling industry from where it serves clients across beverages, brewery and pharmaceuticals industries.

The group also has major operations in ocean transport and shipping – from freight forwarding to cargo logistics requirements. It also manages and operates two floating dry docks that support repair and refurbishment of fishing trawlers and vessels up to 200 tons.

The Mahtani family’s core principle is strive to be ambitious yet thoughtful while maintaining a keen view to the markets and holding fast to disciplined strategic plans. Another is treat employees and vendor partners with respect, humility and understanding. Thirdly is give back to the community and seek excellence from everyone along the way. Above all the family believes that leading in business is by listening.

These principles have guided the leadership of the Churchgate group for over decades with good fortune to show for their efficacy. The company’s management is confident that with the plans on ground, the next 50 years would be even much more rewarding.

Mahtani, who is committed to causes towards uplifting society, provides the needed corporate governance backing to Mr. Vinay Mahtani, who is group managing director/CEO of Churchgate group. Vinay Mahtani trained in International Relations and specialized in economics and entrepreneurial leadership. He is a strategist, gifted in corporate positioning and credited for churning out several new projects, including the grand Hyatt Hotel and Residences in Lagos and World Trade Center in Abuja.