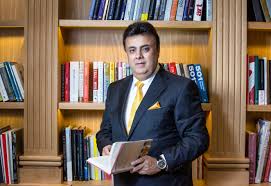 Mr. Sunil Vaswani, group chairman, Stallion Group, is an example of international investors that ignored Nigeria’s poor ranking in terms of investment attractiveness and invested heavily in the country. “When the world thought Africa was a risky place for business, I saw the opportunity, and backed my efforts with full commitment and perseverance,” he said.

Some 25 years ago, Vaswani was like any other entrepreneurs out there trying to drive through his vision and striving to make the most of an opportunity he has envisioned. Presently, he is ranked one of the most influential business leaders in the Middle East, Africa and Asia.

Vaswani’s father operated a modest trading business in Nigeria, which he picked up at the age of 21 on the conviction that the business had the potential to be bigger than what the father made out of it. He applied two strategies that spurred growth and transformation. “When we got going, we identified key products and services that impacted people’s daily lives, and developed a business model that delivered them to the mass population at high quality and fair pricing- these included staple food, nutrition, transportation, fertilizers, FMCG products, banking, clothing and several others,” he said.

“The other strategy was to collaborate with world leading companies in delivering their expertise to the underdeveloped African markets.” Those two steps paved the way for a rapid growth for Stallion Group, taking it beyond African borders into the Middle East and Asia. The group, which is headquartered in Dubai, currently operates in 18 countries some of which constitute the world’s most complex markets.

Stallion Group is a diversified business conglomerate with multiple business lines that include automobiles, commodities, food, agri-business, industries and services. The company is developing new revenue streams for the future in the areas of gas-based heavy industries, infrastructure, healthcare, education among others.

Vaswani recalls the early stages of his journey with the Stallion Group. Africa then was full of people eager to meet daily needs at a time that other parts of the world had moved rapidly in economic development, he said. “I was determined to align myself with the socio-economic needs of Africa and create a bridge with other parts of the world for its growth and prosperity.”

Locating business in Africa then appeared odd, as investors were generally scared of setting up in the continent. Africa was then nowhere close to the hot new market to be explored that it has now become. That precisely was the gap that Vaswani saw as an opportunity and took advantage of it.

Stallion Group is a 45 year-old business enterprise that has grown from its modest beginning in West Africa into a fledgling conglomerate – one of the largest in West Africa. Vaswani acknowledges that establishing businesses in 18 countries and running them in a sustained manner, in some of the world’s most complex markets, can be highly challenging. The success that follows however provides a healing touch, outweighing the difficulties faced in the process, he said.

Stallion Group has a consumer oriented approach in its business, specializing in sourcing, importation, warehousing and distribution of products of mass consumption. Its product lines in commodities include rice, sugar, edible oil, food products, fertilizers, chemicals, steel, building materials, construction equipment and a wide variety of other products of mass consumption.

Its activities in the service sector include shipping, vehicle leasing, home automation, office technologies, banking and transportation among others. The group has a workforce of about 10,000 people it develops through education, training and on-the-job exposure across industries.