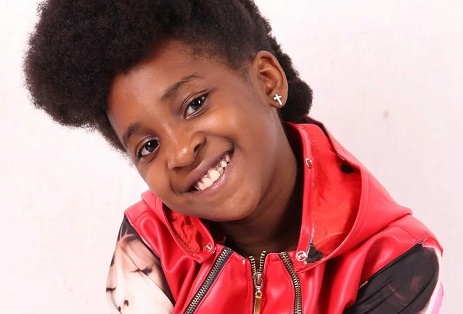 Amarachi Uyanne, 13, came to national limelight in 2012 when she won the Nigeria’s Got Talent musical talent hunt at the age of eight, emerging the country’s youngest millionaire with the cash prize of N10 million that was attached to the title. Since then, she hasn’t looked back. It’s been one success after the other for the multi-talented youngster, who is not only a singer, but is also a dancer, violinist, songwriter, as well as a recording and performing artiste.

Amarachi, a native of Asaba, the Delta State capital, started dancing at the age of five. It is possible not many saw anything extraordinary in her dance steps at that time, since it is in the nature of children of that age to love dancing. Well, if others did not see the star that was waiting to shine at some point in the future, her mother did. And she began early to nurture her.

The talent show at which Amarachi shot her way into the national consciousness was the first time the kid would feature in any competition of any kind. Surprisingly, when her mother bought the form for her to participate in the competition, winning was the last thing on the mother’s mind. All she wanted was for her daughter to participate in the competition so she could get used to crowds for the purpose of overcoming stage fright. “But you can see where it has landed us today”, Mrs, Uyanne, Amarachi’s mother, said of her daughter’s triumph in a competition that also featured bigger and more established singers.

Amarachi’s mother was the one that paved the way for her to emerge from nowhere to stardom. Not only did she buy the form, she also filled for her daughter who had no idea about the competition in which she was going to participate.

As a way of demonstrating that her success at Nigeria’s Got Talent was not a fluke, Amarachi resealed her debut single, Amarachi Dance, on the heels of her victory. She followed it up with another song titled, Ove Sabi, which featured artiste, Phyno. The two singles received rave reviews and massive air plays.

Amarachi has her mum as her manager, which in itself is a guarantee that she is in the best hands. No other manager would protect her interest as her mother does, for so many reasons. For one, she is certain to continue with her education while pursuing her musical career. And there will be no fear of her being taken advantage of, financially speaking. She is following a programme that is carefully drawn up by her mother.

“We are starting a personal dance school for her, where I am going to bring in dance instructors to take her in dance”, he mother said. “I believe that the more you teach her, the better understanding she gets. I had in mind of managing her myself so that she will not be distracted from her education”.

Amarachi plans to travel out of the country for her education. She is also keen on sponsoring the education of her siblings. “I am the first daughter”, she says. “I am planning for my siblings now. I want to fund my education and that of my siblings abroad”.

It is a lofty plan that has received the blessing of her mother. “I will relocate with her, she said. “That’s why I advised her to wait until she completes her primary education. All of us are going to relocate with her”.

The plan to relocate abroad for studies after Amarachi’s primary education appears to have been put on hold for now, as he young entertainer is currently studying in a secondary school in Asaba, where she combines education with her musical career. She has also opened a school, Amarachi Talent Academy, where talents are discovered, trained and nurtured in dance and music.

For Amarachi, whose net worth is currently put at $100, 000, the sky may not be the limited. It may be the beginning.