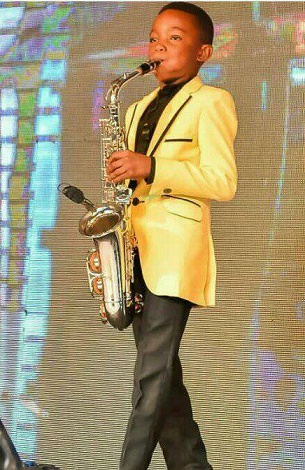 The 10-year old saxophonist playing in the big league

TemitayoKayode, a.k.a. Temmy Sax, the 11-year old saxophonist, began to learn how to play the talking drum at four. His interest in musical instruments increased when he was six, when he found attraction in the saxophone, an attraction that was brought about from his exposure to YouTube.

His father did not believe in him at first, probably because no one in the family plays any type of musical instrument, the reason he turned down the young boy’s request for a saxophone. But his mother, who probably saw what the father did not see, not only believed in him, but also got him a teacher to help sharpen his skills on the instrument.

Temitayo’s father eventually bought him the instrument, and also paid for an internet bundle from which he could learn more about what was obviously his love. The investment paid off earlier than they expected, as the little boy emerged winner of God’s Children Great Talent (GCGT) Season 5, in the seven-to-nine age category competition held at the Eko Hotel, Lagos. The competition featured about 3, 000 competitors from the United States, the United Kingdom, Canada and Nigeria.

That was the breakthrough Temitayo needed, as the victory opened doors to participation in different musical concerts. He was a guest minister at the birthday ceremony of Pastor (Mrs.) FoluAdeobye (Mummy GO), at the Youth Centre of the Redeemed Christian Church of God (RCCG), which was organized by the Pastor’s Seed Fellowship (PSF). The event afforded the kid saxophonist the rare opportunity to play along side such established names like Pastor KunleAjayi, BolajiBanjoko (Beejay Sax) and  instrumentalist Dr. KunlePimiloye (Ksticks). He also had the privilege of performing at the birthday ceremony of Governor AkinwumiAmbode of Lagos State.

Temitayo, the first and only son in a family of five from Kogi State, has performed at high profile Christian events like the National Convention of the RCCG at the Redeemed Camp, in the 2016 and 2017 editions. He was a special guest artiste at the Seven Horns of Joshua Gospel Sax Concert in 2015, and also a guest artiste in the two subsequent editions of the event.

Recognition and admiration for Temitayo’s skills have not been limited to Christian circles. The corporate world has also taken note of his expertise. He performed at the end of year carols and thanksgiving services for Amni Petroleum, Weman Bank and Sterling Bank, and also featured at the Genesis Fashion Show in 2015, 2016 and 2017. He has also performed at musical concerts featuring music icon, King Sunny Ade, and saxophone legends like Mike Aremu, SegunOluwayomi, KunleAjayi, BolajiBanjoko, Olujazz, ImoleayoBalogun and FunmilayoAjayi (Funmisax), as well as gospel singer, Nathaniel Bassey. He has performed in musical events at The Redeemed Evangelical Mission (TREM), Christ Apostolic Church, RHEMA Church, The Anglican Church, The Apostolic Chirch, among others.

Temitayo’s fame has spread abroad. The kid saxophonist has performed in the United States, the United Kingdom and Turkey.

He organized his own musical concert tagged, Grace, on August 20, 2017, and used the occasion to release his debut single. His dream is to be a multi-instrumentalist, a pastor and a medical doctor.