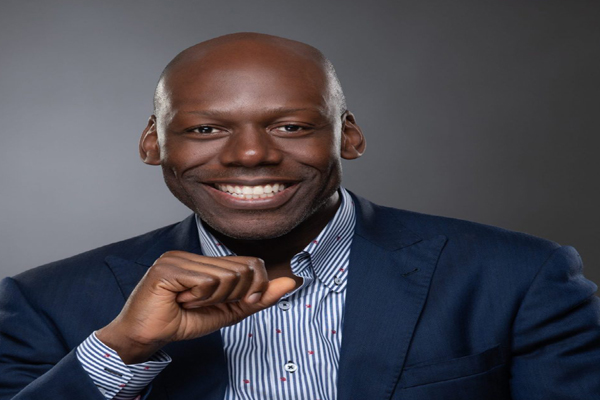 It takes a genius to be able to excel in different positions across different industries, proving at every point to be a round peg in a round hole. If such people truly exist, Amaechi Okobi, Group Head, Corporate Communications and External Relations, could be one of them.

Okobi is said to be fond of describing himself as “a tall, bald guy in a suit”. What he does not add to that description, perhaps out of modesty, is the fact that his intimidating height and impeccable suits which define his identity aid, to a large extent, his job of marketing whatever brand he is assigned to market, because of the arresting attention he commands.

Okobi could probably have been dunking, slamming, hitting rebounds or recording assists on basketball courts in the United States where he received his education if he had been interested in the sport for which he is naturally suited, physically speaking. But he chose to chart a path in the corporate world. It would be an understatement to suggest that he has made a success of that choice. He also made a name, a good name which, as they say, is better than gold.

The tall, bald guy in a suit has traversed several industries. And wherever he has found himself, he has proved to be the right man for the job. If he has cause to move on, he leaves his footprint behind.

Okobi is the man at the head of the team that is behind the soar away and highly positive image of Access Bank Plc, one of Nigeria’s leading financial institutions. When he joined the fold of the Tier 1 lender seven years ago, his pedigree recommended him for the job that was cut out for him which, among others, was to develop the bank’s brand and strategy and marketing, media and public relations; events and sponsorship; corporate social responsibility and sustainability.

Okobi has, during the period, driven the bank’s communication strategies which have succeeded in repositioning the institution in the public arena. If the communication is not about the mega acquisition of Diamond Bank Plc, it is about a similar exercise outside the shores of Nigeria, into the Eastern and Southern parts of Africa where the bank is making inroads, fast becoming a continental brand. In recent times, moves by Access Bank to acquire a financial institution in one part of Africa or another have been regular features in the media, moves that are spearheaded by one of Nigeria’s banking wizards – Herbert Wigwe.

The positive public perception of Access Bank is not bought with money. It has not come about because of any deliberate effort by the financial institution at putting a white coating on a black surface. It is reflection of the bank’s position as one of Nigeria’s strongest, most resilient and best performing financial institutions.

The accolades that have trailed the bank in recent times prove to be testimony of the fact that Okobi is discharging his responsibilities creditably. He has his own personal recognition to show for his efforts as well.

Okobi’s journey in the corporate world started in the U.S., where he attended St. Edmund’s College, and then George Washington University, from where he obtained a degree in Business Administration in 1995. He joined Revlon, the global cosmetics company in 1996 as an International Marketing Manager, on which position he provided support to 17 international subsidiaries and six distributors, coordinating products, promotions, advertising and marketing strategy. He also handled domestic marketing for Ultima II. His responsibilities also included executing a global strategy for the brand through advertising, promotions and public relations.

After a five-year stint with Revlon, Okobi joined Global Energy as Business Manager in August, 2002. At Global Energy, he channeled his energy into sales of multiphase pumps and multiphase flow meters.

He joined Nigerian Breweries Plc in December, 2003, upon his return to Nigeria, as Brand Manager, Heineken. On that position, he had additional responsibility for initiating, planning and executing strategies and programmes that were aimed at gaining market share for Gulder.

Okobi left the famous beer makers for a spell in the telecoms industry, working as Senior Manager, Post Paid Events and Sponsors, at Globacom. He would respond to the attraction to alcoholic beverage by joining Diageo International (Guinness Nigeria) in November, 2010, as Brand Manager, Marketing, the position on which he helped sustain the Johnnie Walker trademark as a profitable asset of the global brand. He held the position till April, 2014. In-between his schedules in the corporate world, Okobi returned to the classroom in 2012 for a course in Digital Marketing at the Columbia Business School, in the U.S.

Okobi’s ability to adapt effortlessly to industries and environments has chiefly accounted for the numerous successes he has recorded in all the places he has worked – whether in cosmetics, engineering, alcohol or banking. He prepares himself psychologically, physically and spiritually before making any switch.

“Six years ago (seven years now) today, after a bike ride and breakfast, I put on a suit and tie, cherry-red socks and black lace-ups, and got into my car. Destination: Access Bank. I walked up the stairs at 999C Danmole Street for my first day (and brand-new adventure) at Access Bank. Sometime during the night, my days of promoting whisky and premium spirits ended as I began the process of morphing into a banker,” Okobi is reported to have said, on his switch from one industry to another.

Since Okobi joined Access Bank in May, 2014, the financial giant has maintained an upward trajectory in terms of positive image. This is evident in the fact that the bank has so far won almost all there is to win in awards and recognitions in the banking industry, and even outside.