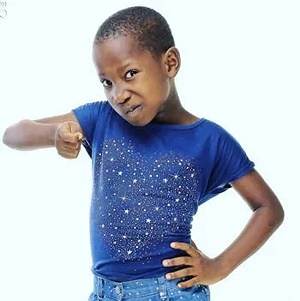 The seven-year old comedienne on the world stage

At the rate Eammanuella Samuel is going, she may end up proving that a female kid can do better than a man that is old enough to be her father. The Ali Babas, Basket Mouths, I Do Dyes and Gordons of Nigerian comedy had better watch their backs. A new (female) kid has joined the fray.

Emmanuella is the seven-year old comedienne that has taken the Nigerian comedy scene by storm. She has proven by her dexterity in the laughter business that talent is no respecter of age or gender. What a naturally gifted adult can do, an equally gifted kid can do, as well.

Emmanuella, from Imo State, was discovered by the Mark Angel Comedy skit, This is Not My Real Face, in which she participates, which features in the YouTube comedy channel. It is the outfit that actually brought her to limelight. She was then in primary one. It wasn’t long before her performance began to attract not just attention to her, but also awards from different bodies.

In 2015, she won the G-Influence Niger Delta Special Talent Award, the City People Award and the NEA Award. In October, 2016, she won two awards in Australia, namely, The Princess of Comedy and The Most Prominent Kid Comedienne, at the Afro-Australia Music and Movie Awards. Mark Angel Comedy, the outfit that discovered her, won the Best sub-Saharan Channel at the YouTube Awards, in 2017.

Emmanuella featured in a CNN interactive session in November of 2016. The fame and popularity of the Nigerian kid entertainer had begun to spread far and wide.

The icing on the cake for Emmenuella on her journey to international stardom was her invitation to feature in a Disney movie. The kid entertainer personally announced the invitation on her Instagram handle. The announcement drew applause and kudos from her supportive Nigerian fans, including Senate President, Dr. BukolaSaraki, who not only congratulated her on the feat, but also invited her to visit his office in the National Assembly. Saraki charged her to use the opportunity to show the world the stuff she is made of.

“Congratulations, Emmanuella! Make sure you make them laugh over there”, Saraki said. “Come by the @NGRSenate sometime, let’s discuss how we can develop the potential of our young talents in the creative industry”.

Emmanuella has not only found fame in the art of making people laugh, she has also hit fortune. She has begun to attract the attention of corporate organizations as a potential brand ambassador, and currently features in a television commercial for a popular milk product. At just seven, she has an estimated net worth of N25 million.