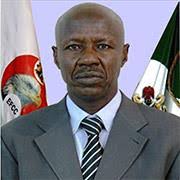 Mr. Ibrahim Mustafa Magu, chairman of Economic and Financial Crimes Commission [EFCC] was appointed by President Muhammadu Buhari to head the commission in November 2015. His is one of the appointments by the Buhari’s administration that caused a spillover of the controversy about Magu’s integrity within the EFCC itself to the legislative arm of government.

Twice the Senate rejected his confirmation as substantive chairman of the commission on account of his previous records of having been thrown out by the commission and suspended by the police though he was not found guilty of any offence.  To the President however,   Magu is the right and proper anchor man in his government’s declared fight against corruption.

In the eyes of his peers at EFCC before the current appointment, Magu is an incorruptible and courageous officer, which is the reason why he was made head of investigations of senior public officials – a highly sensitive unit within the agency.

To the presidency, Magu is an indomitable anti corruption war lord. Vice President, Prof Yemi Osinbajo described him as a nightmare to corrupt people. According to Nasir el-Rufai, governor of Kaduna State, the President has vowed that Magu will remain chairman of the EFCC as long as  he is president.

While the controversy rages, Magu is working anxiously to prove the President right. So far, he has lots of records of successes to show as proof that EFCC is winning the battle against corruption in high places. In 2017, he showed an impressive record of N512 billion in recoveries of looted public funds.

EFCC’s top recovery records include N329 billion subsidy fraud from petroleum marketers, the forfeiture of N32 billion and $5million to the federal government by former minister of petroleum resources and the forfeiture of N449 million discovered at Legico Plaza in Victoria Island, Lagos.

The commission has also secured the final forfeiture of over $43 million discovered in an apartment at Osborne Towers in Ikoyi, Lagos. It has made a withholding tax recovery of over N27.7 billion from banks, recovered over €6.6 million for Nigerian Ports Authority, N1.1 billion on behalf of AMCON and subsidy fraud funds of over N4 billion.

Magu has a long list of testimonial achievements at EFCC in terms of the number of convictions secured, looted funds recovered and the number of high profile cases handled or in process. “We will continue to fight corruption, whether anybody likes it or not. We are convinced that it is the only way we can bring succor to this country,” he told members of staff of the anti-graft agency while marking the 14th year of its operations in April 2017.

EFCC under Magu has agreeably gained speed in the narrative of criminal prosecution in Nigeria. The commission has been empowered to gain strength and stability as a law enforcement agency with a significantly improved institutional clout in Nigeria and within the international community. The result is steadily increasing number of convictions from 103 in 2015 to 125 in 2016 and 137 within the first eight months of 2017.

The onslaught is unprecedented, with many high profile cases swept aside to ‘no-go areas’ by previous governments now under the searchlight of EFCC. Magu is not just stepping on big toes but is setting them on a probing fire with the prosecution of suspects in the $1.1 billion Malabu oil scandal. The same is true in the prosecution of top military officers and other actors involved in the $2.1 billion arms deal scandal. A number of former state governors, serving senators and members of federal and state assemblies are presently in the EFCC’s net.

Even the judiciary that has all along been putting on an air of infallibility has seen for the first time the probing lights of the anti graft agency. Never before has the anti corruption battle been waged at the corridors of the members of the bench and bar as has been seen with the sweeping broom of the APC-led government.

A number of high ranking lawyers and judges are facing trial at various courts across the country for bribery and corrupt enrichment. Cleaning up the judiciary is considered a prerequisite to successfully fighting corruption in the country and obtaining justice from the law courts.

EFCC’s great exploits in fighting corruption has added a lot of feathers to its institutional integrity and public image within and outside the country. Magu has given the institution a big image lifting as a serious corruption fighting agency. This has continued to win the respect and support of the international community.

The Chinese government has also been highly impressed by the zeal and commitment of EFCC to rid Nigeria of corruption. L.I. Xiaohong, director in the Office of the Central Leading Group for Inspection Tours of the Communist Party of China told Magu “we have heard a lot about your efforts in the fight against corruption and commend you for your doggedness in ensuring that you kick corruption out of Nigeria.”

Magu has taken EFCC’s operations beyond Nigerian boarders to have operatives at major embassies and mission fields abroad in view of the transnational dimension of corruption. This is in addition to collaborations already established with external agencies such as Federal Bureau of Investigations, the UK Metropolitan Police and the Department of Justice, among other international law enforcement agencies.

In a move to further extend the support being received from the external agencies in the war against corruption in foreign jurisdictions, Magu is making ambassadors part of his army at the various international fronts. Some operatives of the commission have already been posted to foreign missions.

Speaking to ambassadors-designate recently, Magu said, “we are making you our ambassadors to fight corruption wherever you go because we alone at the EFCC cannot do the job without your support”. He wants ambassadors to get involved in tracing and recovering stolen assets and facilitating the repatriation of looted funds and runaway looters.

Strictly working to the letter of the zero-tolerance mandate of the President, Magu is getting every stone everywhere overturned. He is calling on good men everywhere to “key into our mission of ridding Nigeria of corruption, as this will be your greatest service to Nigeria”.

He has extended EFCC’s operational coverage in the country with new offices in a bid to involve all segments of society in the anti-corruption crusade. His plan is to have a united front in the crusade by rallying the Nigerian citizenry to wage a full scale war against corruption that would give corrupt individuals no place to hide.

“The EFCC alone cannot win the war, no one has the monopoly of knowledge on how the battle can be fought and won. We must all come together and strike a common consensus on how to confront and defeat this monster called corruption,” the EFCC’s boss said.