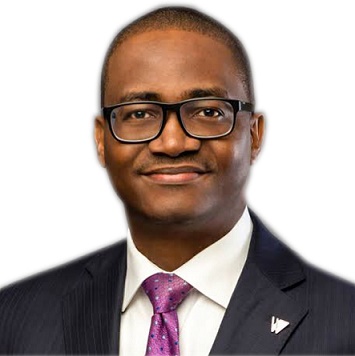 (For driving a break-out growth in earnings for the second year, Adebise is named one of The Top10 Magazine’s top 10 bankers of the year, 2019.)

Mr. Ademola Adebise, managing director/CEO, Wema Bank Plc, engaged a new growth momentum for the bank in 2018 and kept it firing in 2019. He kept on accelerating on the revenue and profit growth highway from quarter to quarter and the biggest profit record ever was in the making for the bank in 2019. The prospects are very good for a breakout growth in profit for Wema Bank for the second year.

Adebise closed the third quarter operations of the bank in September 2019 with a big profit boost and the bank realised close to 46 percent of the third quarter closing profit within the three months to September. The third quarter profit figure was already well above the full year record in 2018 at over N4 billion compared to N3.3 billion.

Interest income still grew by an industry defying margin of 26 percent year-on-year to N49 billion at the end of the period. Non-interest income came alive in the third quarter with close to 83 percent advance in net trading income year-on-year to N8.94 billion. This provided the biggest push to profit performance the bank posted in the third quarter.

Two major speed-breaking hurdles stood on the way of the bank in 2019. One is credit impairment expenses, which grew at a galloping speed all the way from the first quarter. At the end of the third quarter, loan loss expenses had advanced by more than 240 percent year-on-year to N1.62 billion.

Another constraint came from interest expenses, which overtook interest income on the growth track at 38 percent compared to 26 percent. That caused a sharp slowdown in net interest income from 31 percent at half year to 8.6 percent at the end of the third quarter.

How Adebise was able to surmount these challenges and kept the bank on good stead underscores the weight of good management quality on corporate results. He applied the enhanced revenue performance of the bank to overwrite the impact of the high growth in credit loss expenses.

Another strategic move on the part of management is a firm hold on operating cost – which moderated and provided a cost saving centre for the bank, diluting the other cost increases.

The outcome is a reduced operating cost margin from close to 46 percent in the same period in 2018 to 41 percent at the end of September 2019 – the lowest mark for the bank in many years.

Wema Bank is getting the results of Adebise’s cost-income titration in 2019 aimed at delivering increased wealth to shareholders. He built a bigger profit capacity for the bank in the year than any time in over a decade.

He closed the third quarter operations with improved profit margin, which combined with the boost in revenue to deliver the elevated profit performance at the end of September 2019.

The bank closed the third quarter operations with gross earnings of N64.83 billion, an accelerated growth from 27 percent at half year to 32 percent year-on-year. This indicates that the strongest growth in gross earnings in seven years is to be expected from Wema Bank at full year.

The strong revenue growth is founded on the expansion of key earning assets. Loans and advances to customers expanded by 17 percent from the prior year’s closing figure to stand at N287 billion at the end of the third quarter. The investment portfolio has also expanded at 71 billion over the same period.

Wema Bank closed the third quarter operations with an after tax profit of a little over N4 billion – an industry leading growth of about 55 percent. The full year profit outlook indicates that a further accelerated growth is to be expected ahead of the big leap of 47.5 percent in 2018.

For driving a break-out growth in earnings for the second year, Adebise is named one of The Top10 Magazine’s top 10 bankers of the year, 2019.

Adebise took over the headship of Wema Bank in July 2018 and was confirmed as the substantive chief executive officer on 1st October 2018. He also serves on the boards of Nigeria Inter-Bank Settlement System Plc, AIICO Insurance Plc and AIICO Pension Managers Limited.

He joined Wema Bank in 2009 as executive director and was appointed deputy managing director in January 2017 – in charge of corporate banking, treasury and support functions of the bank.

He started his banking career in 1988 at the information technology department of Chartered Bank where he worked in various capacities and attained the position of chief finance officer and head of information technology. He later joined National Bank of Nigeria as assistant general manager in 2001 where he was in charge of corporate banking, treasury and electronic business units.

Before joining the bank, he worked as a programmer/systems analyst at Accenture – an information technology company in Nigeria.