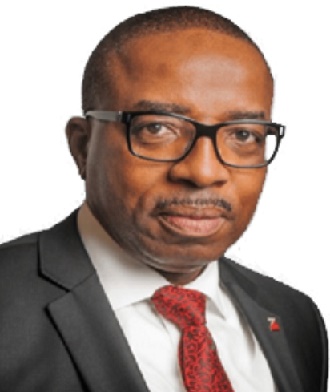 Managing Director/CEO, Zenith Bank Plc (For his ability to build the biggest profit in the banking sector consistently in good and bad seasons, Onyeagwu is named one of the top 10 bankers of the year, 2019 by The Top10 Magazine.)

Mr. Ebenezer Onyeagwu, managing director/CEO, Zenith Bank Plc, is getting set to deliver the biggest profit volume in the banking sector for the 2019 operations. He is the man presently driving Zenith Bank’s culture of consist growth in both good and bad earning seasons. That keeps the bank in the lowest level of investment risk amidst the high volatility the banking industry has faced in recent years.

Onyeagwu seems to be the custodian of the formula of how to keep profit growing irrespective of the changing cost-income behaviour from year to year. In 2018, he turned a 15 percent drop in gross earnings into an 11 percent rise in profit. He accomplished that by creating big cost saving centres in loan impairment and interest expenses.

At the end of the third quarter in 2019, he reinforced revenue performance and still pushed profit slightly ahead of moderately improving gross income. This is notwithstanding that loan loss expenses were on the rise in the year and interest expenses shifted to a revenue consuming side.

Zenith Bank closed the third quarter operations with one of the largest revenue numbers in the banking industry and the biggest profit figure among banks. A combination of large revenue with high profit margin is the critical success factor that has put the bank ahead.

That has brightened Zenith Bank’s full year performance expectations that management would rebuild revenue and top up the bank’s leading profit volume in 2019. Management built the strength for the improved earnings outlook with strict cost controls to compensate for slow growth in revenue.

Onyeagwu faced challenges from interest income – the main revenue line of the bank, which stayed on a declining mood for the second year at the end of the third quarter. He was however able to prop up non-interest earnings, which more than compensated for the decline in interest income and pushed gross earnings ahead.

Another major challenge for the Zenith Bank’s CEO in 2019 came from loan impairment expenses, which changed direction from over 81 percent drop in 2018 to a 27 percent rise year-on-year at the end of the third quarter. A general resurgence of credit losses has followed the mandatory expansion of the risk asset portfolio.

The bank’s management grew the loans and advances portfolio by 12 percent to over N2 trillion at the end of September 2019 over the January opening figure. Over the same period, it reduced the investment assets by 13 percent to N492 billion. This is in compliance with the Central Bank’s increase in loan deposit ratio, which is meant to raise bank lending to customers.

Net interest income after loan impairment expenses dropped by 8 percent to N196 billion at the end of the third quarter. This made profit improvement extremely difficult, as the core business of the bank could not deliver profit.

Onyeagwu had to explore channels for cost saving big enough to remedy the drawback in net interest income and still keep profit growing. The ability to accomplish the corporate purpose despite the odds is the hallmark of management.

The full year revenue outlook is up for Zenith Bank after a drop of 17 percent to N620 billion in 2018.

Through the volatility in costs and incomes, management succeeded in cutting a path to stable growth in profit. Onyeagwu delivered an after tax profit of N150.7 billion at the end of the third quarter – the biggest profit figure in the banking sector. It is an improvement of 4.5 percent year-on-year, ahead of the 3 percent gain in revenue.

This indicates an improvement in the ability of management to convert revenue into profit during the period. Net profit margin improved slightly at about 31 percent at the end of the third quarter.

Increasing revenue and improving profit margin are the ingredients that Onyeagwu has combined to take his bank to a higher height in 2019. He ended the third quarter operations with a brightened full year outlook. Shareholders can look forward with confidence for yet another big harvest in an otherwise bad operating season.

The difference is the management quality equipped with the knowledge and skills to navigate the bank through a difficult regulatory and operating terrain to maintain consistent growth in profit.

For his ability to build the biggest profit in the banking sector consistently in good and bad seasons, Onyeagwu is named one of the top 10 bankers of the year, 2019 by The Top10 Magazine.

Onyeagwu is a chartered accountant with about 30 years of experience in banking. He was trained in reputable institutions of learning in Nigeria, the United Kingdom and the United States of America and is a vastly experienced financial expert.

He has been in Zenith Bank since 2002 and has handled strategic operations covering internal control and audit, new business and branch development, risk assets management, treasury functions, top level corporate, multinationals and public institutional relationships, among others. All the way, Onyeagwu has demonstrated a high level of professionalism, competence, integrity and commitment to the set objectives of the bank.

He became deputy managing director of Zenith Bank in 2016 with oversight functions covering the bank’s financial control and strategic planning, risk management, retail banking, institutional and corporate banking portfolios. He was also in charge of IT group, credit administration, treasury and foreign exchange trading and general administration of the bank.