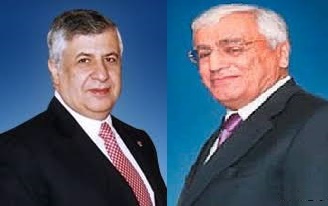 The Chagoury brothers were both born and raised in Lagos by their Lebanese immigrant parents that settled in Nigeria in the 1940s where they became fully part of the Nigerian society and culture. After his education in Lebanon, Gilbert returned to Nigeria while Ronald joined him later after completing his own studies in Lebanon and the United States.

The Chagoury brothers co-founded C&C Construction in the late 1979, which was the forerunner of Hitech and ITB, which now form the construction division of the Chagoury Group of Companies. From this small beginning, the Chagoury Group has grown to encompass a multi-faceted business conglomerate with estimated valued of $4.2 billion.

Gilbert and Ronald had a vision to create a self-sufficient group structure for the companies in order to maintain their competitive edge in a rapidly changing global economy. It is this stable foundation that has enabled the Chagoury Group of companies to flourish. The Chagoury Group’s C&C Construction division built Ideal Flour Mills in Kaduna in 1978, the first of four flour mills the company has established in Nigeria.

The Chagoury Group has grown to become one of the leading corporations in Africa, developing and utilizing Nigerian professionals and the Nigerian workforce to grow the business. The group employs tens of thousands of Nigerians, other Africans as well as non-African personnel.

There is also a real estate division that handles luxury residential developments along with the new Eko-Atlantic project – a new city that is being built on land reclaimed from the sea in Lagos. The project, which will offer luxury apartments, several marinas, shopping malls and offices, is expected to reach 9 km ², employing about 150,000 workers.

The Chagoury Group has a hotel and catering division as well as a healthcare division that provides healthcare services to the employees of the group and other Nigerian-based companies. It is also into haulage business operated by its subsidiary, Fleetwood Transportation. Ragolis Waters, a member of the group, produces Ragolis Natural Spring Water.