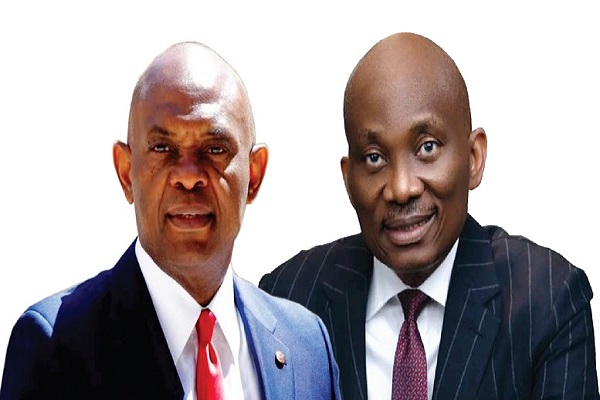 Tony Elumelu and Ndudi Elumelu are siblings in a class of their own. Both are hugely successful in terms of their financial networth and career attainments. Both have gotten to the pinnacle of their chosen careers – Tony in business and Ndudi in politics – and both collecting along the way innumerable honours and Awards that any outstanding and patriotic citizen can hope for.

But these are not the things that set the Elumelu brothers apart. What marks them out is the unique and extraordinary bonding and mutual affection they have forged with each other over the years. While Tony calls Ndudi “my honourable dear brother” Ndudi calls Tony “the lion of the family”. They have been able to avoid, resist or overcome the usual relationship destroyers such as envy, rivalry, competition, divergent world views and other environmental factors that tear family or sibling relationships apart.

Born to the family of Dominic and Susan Elumelu of Onicha-Uku, Aniocha North LGA, Delta state, Tony, now 59, is only two years older than Ndudi.  From their formative years to this day, the relationship of the duo has been as chummy in private as it is in publc; and they proudly seize every opportunity to demonstrate that fact. On many occasions, they are always seen taking a walk round the village together, cooking together, eating together, etc.

By coincidence rather than design, providence appears to have acknowledged this rare sibling bonding when Tony and Ndudi became the first blood brothers to be conferred with Nigeria’s National Honours Award same day. On Thursday, October 13, the two of them, literally, walked hand-in-hand to the dais to receive the Award plaques and handshakes from President Muhammadu Buhari. One can only imagine how elated their mother will be, seeing her beloved two sons on national stage being honoured by the country the same day.

Joint recognition of siblings at the national stage only comes generations apart – even so, it happens mainly in national sports teams.

This rare national recognition was the latest opportunity for Tony and Ndudi to publicly celebrate each other and their love. Tony said in a post on his Instagram page: “Today was a special day.  I accepted Nigeria’s honour, the Commander of The Order of The Federal Republic (CFR).  I do so, not for myself, but for every young Nigerian who dares to dream.  I do so for every young Nigerian who remains resilient and stays committed to the growth and development of our great nation… I also congratulate my brother, the Hon. Ndudi Godwin Elumelu, a member of the House of Representatives, as he is also honoured with The Officer of The Order Of The Niger (OON). This is a double celebration for us.”

Similarly, Ndudi’s post on his Instagram page read: “Today I received a national award of OON (Officer of the Order of the Niger) along with my elder brother, Tony Elumelu CFR and, thereafter, had an enlarged reception in Abuja with  former president, Goodluck Jonathan and Dr. Ngozi Okonjo-Iweala, who received GCON, in attendance.

Tony posted another message with photographs on his Instagram page under the caption: “It was indeed an honour for my family yesterday to have both my brother and I receive national awards.

Similar posts of joint activities or celebrations in the past by the famous Elumelu siblings have been common.  Though both of them are Christians, they once took advantage of the Public Holidays declared by the Federal Government to celebrate the Muslim Sallah. Tony shared a video on Instagram of himself spending time with his brother, Ndudi, in their hometown in Delta State. Ndudi, who is the current Minority Leader of the House of Representatives was seen in the video preparing a dish while Tony dished the food after it was prepared.

“Enjoying the Sallah holidays in my Hometown with my brother Hon @ngelumelu15,” he wrote.

In another previous celebration, the famous “love  brothers” rolled out the drums in a most grandiose manner to honour their matriarch, Chief (Mrs.) Suzanne Elumelu who had just hit the ripe age of 90.

The celebration began with a “Thanksgiving Mass” at the Church of Assumption, Falomo, Ikoyi, Lagos, and was attended by the crème de la crème of Nigerian society. With soul-stirring songs, praises to the Almighty and fervent prayers, the service was very lively.

After the church service, all roads led to Harbour Point, Victoria Island, for a glamorous reception, where guests were treated to good food and drinks of various kinds and lively performances by BeeJay Sax, Elegant Stallion, Onyeka Onwenu and pop star, Phyno, while DJ Sousse was on the wheels of steel.

Of course, Tony and Ndudi were the joint chief hosts.

It was in that family atmosphere of camaraderie and conviviality that the two brothers who were born in Jos, the Plateau State capital, climbed through their respective careers to the very top of their fields. While Tony went the way of business and entrepreneurship, Ndudi went the way of politics.  Today, both men, without doubt, are being deservedly celebrated as the pride of Onicha-Uku, Aniocha North LGA, Delta state, and exceptional and worthy citizens of their country, Nigeria.

Tony (full name: Anthony Onyeamechi Elumelu),  an economist, entrepreneur, philanthropist and father is, perhaps, one of Africa’s finest and leading lights in the business world of banking.

Born in March 1963, Tony bagged a degree in Economics from the former Bendel State University and a Masters’s Degree in economics from the University of Lagos. He further beefed up his academic credentials with a degree from the prestigious Harvard Business School in an advanced management Programme.

The eagle-eyed business mogul began his career as an entry level analyst at All states Trust Bank. After twelve months of employment, he was promoted to the position of branch manager, making him the youngest branch manager (27 years old) at the time, because of his resilient and brilliant work spirit. Tony was born with a drive and a passion to climb to the peak of hills and mountains.

The higher he climbed, the more he noticed higher grounds to conquer. After years of working as a Branch Manager at All States Trust bank, he approached his bosses and told them he wanted to resign to start his own bank. With his savings and truck load of experience, he left with their blessings. In 1997, Tony led a small group of investors to acquire a small, struggling commercial bank in Lagos, known as Crystal Bank. After the acquisition, he changed its name to Standard Trust Bank. Within a few years, with Tony’s expertise, STB (as it used to be popularly called), turned profitable.

Later, he acquired the United Bank for Africa (UBA) and initiated a merger of STB and UBA, which has remained one of the biggest mergers in the history of Nigeria’s Capital markets.

This banking group has, over the years, transformed to a Pan-African bank, with subsidiaries in 20 African countries, in the US and UK.

In 2010, Tony Elumelu retired from UBA, founded Heirs Holdings where he focused on investments in different sectors. Then he established the Tony Elumelu Foundation in his bid to give back to the society and nurture future successful businesses out of Africa.

Tony says two things motivate him – African youth and the desire to leave a legacy. “I say it often, I am inspired by the youth of this great continent.  They don’t have infrastructure, certainty, defined career paths, Ivy League opportunities – but they are hungry for success.  I have worked with and continue to work with some of Africa’s finest and brightest minds.  This generation has everything it takes to transform our continent.”

On July 31, 2010, as retiring CEO of the UBA, he announced the establishment of Heirs Holdings and the Tony Elumelu Foundation.  “I had a vision of building a legacy, not just for myself, but for others.  Today Heirs Holdings has grown in ways we could not imagine, with investments in financial services, power, oil and gas, real estate, hospitality and healthcare.  Heirs Holdings has achieved so much, in so little time.”

Tony Elumelu credits his success to hard work, resilience, long-term vision and, most importantly, luck. In 2014, he made the Forbes billionaires list (Net Worth: $700 million in 2022) and has, till date, remained one of the richest men from Africa.

The union which was certified in 1993 is blessed with seven children.

Tony’s immediate junior brother, Ndudi Elumelu, came into the political limelight when he won a seat in the House of Representatives in 2007. He was reelected and served a second term between 2011 and 2015.

He made history in the House when he, as a first time member of the house, emerged as the Chairman of Grade A committee (House of Representatives Committee on Power). This is yet to be repeated by another legislator.

Ndudi, representing the Aniocha/Oshimili Federal constituency, because of his progressive and outstanding performance, was returned to the House of Representatives in 2019, and he became the Minority Leader. This upset many people who tried to snatch the position from him. But because of his good work and the support of those who appreciated his progressiveness, he remains the Minority Leader to this day.

He has various academic qualifications from prestigious institutions both in the country and overseas. They are: Diploma in Contemporary Public Administration and Management from Galilee International Management Institute in 2017, PGD in Organizational Leadership from Oxford University in 2009; Leadership and Best Practice Certificate from Harvard Business School, Boston in 2005; Strategic Leadership from University of Oxford in 2004; Masters in Business Administration from Ambrose Ali University, Ekpoma in 2000;  and a B.Sc Accounting from the same institution in 1993, and National Diploma in Accounting from Yaba College of Technology in 1989.

Ndudi also extended his attributes of loyalty and friendliness to the political arena where he has demonstrated excellent working relationship with his state Governor, Ifeanyi Okowa, something that’s not very common among people holding leadership positions at the national Assembly who are always at loggerheads with their state governors.

He sponsored various Bills and moved many motions which have impacted meaningfully on the economy of the country and on the lives of the people.

The Honourable Member believes in formulating and implementing policies aimed at positive transformation of the lives of Nigerians and creating avenues for provision of infrastructures for the economic empowerment of the citizenry.

The relationship between the Elumelu brothers is a model in sibling bonding that should not only be celebrated but should also be emulated by others for the progress, growth and development of the family and the society in general.