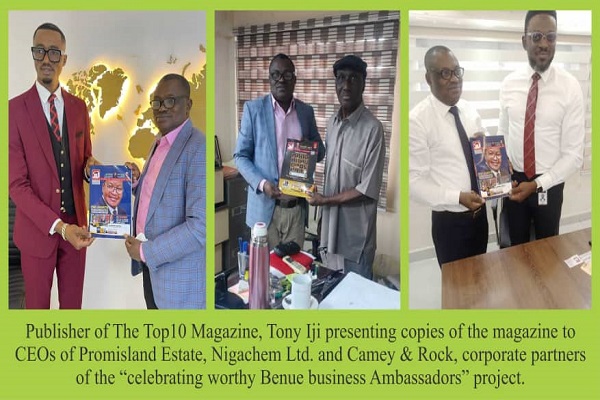 Leading corporate establishments owned by Benue indigenes are teaming up with The Top10 Magazine as sponsors of a gala night being put together by the magazine to celebrate and honour accomplished Benue-born business leaders who have distinguished themselves as ambassadors of the state in the business world.

Leading the list of organisations that  have so far indicated interest as sponsors of the event are Promiseland, a fast-rising Abuja- based real estate company known for moving people from poverty to prosperity; Camey & Rock, a leading company in financial advisory, management and business consulting, project management and project finance; Nigachem Nig. Ltd, a leading company in manufacturing and distribution of chemical and allied products; and Idoma Carnival, the convener of the annual Idoma International Carnival at Otukpo.

Behind these organisations are young Lawrence Oloche, CEO of Promiseland, Peter Adejoh, CEO of Camey and Rock, Elder Sylvanus Ghasarah, Chairman of Nigachem and Edwin Ochai, chairman of Idoma Carnival.

In separate meetings with the management of The Top10 Magazine, the Chief executive officers of the respective companies, who are also leading entrepreneurs from the state, have all endorsed the project as key sponsors of the event. The event which is slated to hold on February 12, 2023 at Rockview Hotel Royale, Abuja, is being put together by The Top10 Magazine in conjunction with other media establishments foundded by other Benue media professionals as a night of excellence to celebrate and honour the most accomplished Benue-born business men and women who have distinguished themselves as true business ambassadors in the business world.

A statement by the publisher of The Top10 Magazine, Tony Iji, expressed appreciation to the companies that have so far keyed in as sponsors of the project and promise that effort was still being made to bring in more sponsors to ensure huge success of the event befitting the class of the personalities lined up to be honoured.

He said that the event is designed as an evening of social interaction to bring together accomplished Benue-born business men and women who have distinguished themselves as pride of the state in the business world, their families, friends, associates and other key stakeholders to socialize, network and interact with each other. He said that the event was expected to be graced by eminent Benue indigenes, crème de la crème and friends of the state, captains of industry, top executives from both private and the public sectors.

He said that a special award edition of the magazine would also be published to chronicle the success story and business accomplishments of the Business Ambassadors being celebrated. The publication which would be published in both hard copy and online versions for wide circulation will be unveiled and distributed at the event ceremony.

He said that the major highlight of the evening would be the presentation of Awards of Excellence as Worthy Benue Business Ambassadors to the distinguished business personalities selected for recognition on the night.

Mr. Iji said: “In the last seven years of our existence, we have blazed the trail celebrating people and organisations that have attained excellence across different sectors of the society and across different climes. As a Benue indigene, I feel time has come for us to look back home to celebrate and honour the best of our state who have distinguished themselves as proud Benue business ambassadors making waves in different industries across the globe”.

The event is expected to attract performance by high profile entertainers such as musicians, comedians, cultural troops, etc.