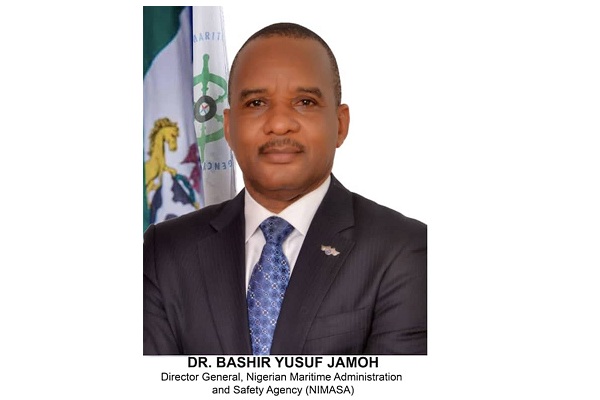 The Director General of the Nigerian Maritime Administration and Safety Agency NIMASA, Dr Bashir Jamoh, is set to be honoured by His Excellency, President Muhammadu Buhari with the conferment of the Officer of the Order of the Federal Republic (OFR).

This was disclosed in a conveyance letter to Dr. Jamoh from the Office of the Honourable Minister, Ministry of Special Duties and Inter-Governmental Affairs, Senator George Akume with the investiture ceremony scheduled to hold at the International Conference Center (ICC), Abuja on Monday, 10th October, 2022.

Recall that Dr. Jamoh had served the Nigerian maritime sector as an administrator for over 30 years when he was appointed by President Buhari as the NIMASA DG in March 2020.

Since that time, he has overseen the successful deployment of the Integrated National Sec urity and Waterways Protection Infra structure otherwise known as the Deep Blue Project which has played a major role in achieving a reduction of  piracy in the Gulf of Guinea to its barest minimum since 1994 and culminating in Nigeria being removed from the infamous piracy red list by the International Maritime Bur eau, IMB.

A hallmark of his tenure at the helm of NIMASA has been his institutionalization of collaboration among stakeholders, within and outside the country, to achieve major milestones in the sector. One notable example of this has been his initiation of the Gulf of Guinea Maritime Collaboration Forum/ Shared Awareness and De-confliction (GOG-MCF/SHADE) which has demonstrated the positive outcomes derived from information sharing among regional and non-regional military forces in achieving a secure maritime space.

Reacting to the news on his social media handle, Dr. Jamoh expressed gratitude for being considered for the honour stating: “Words cannot express how humbled I feel to be so considered for the National Honour as an Officer of the Federal Republic (OFR). When I began my maritime journey 30 years ago, little did I know that I would be so favored by Almighty Allah to rise to the position of NIMASA DG, let alone to be considered for one of the highest honours in the land”.

Dr Jamoh especially thanked His Excellency, President Muhammadu Buhari, and the Standing Committee on National Honours Award for deeming him worthy of the honour while also appreciating everyone who had supported him throughout his tenure as NIMASA Director General especially the maritime stakeholders.