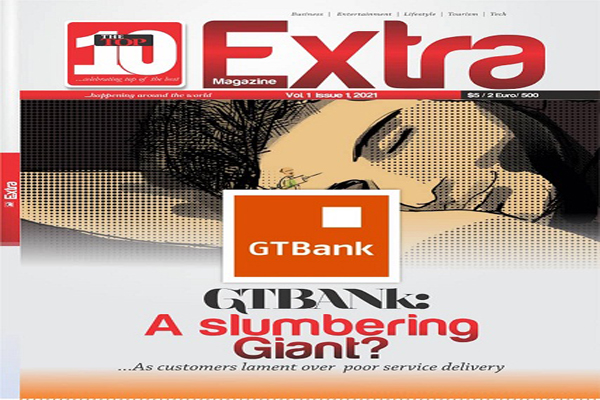 GTBank is undoubtedly one of the giants of the Nigerian Banking industry, the equivalent of the elephant in the animal kingdom. But for all practical purposes, the bank is tending towards being a metaphor for the all-powerful elephant which, revelling in the magnificence of sweet slumber, neglected to drive the ant entering its ears. By the time the elephant woke up to the reality of its situation, it was too late. The tiny creature had dealt a fatal blow on the giant elephant.

It appears some potentially deadly ‘ants’ have infested GTBank and it would only fail to identify and deal decisively with them at its own peril.

The signs are there for all to see. GTBank’s poor online services have reached unprecedented levels, with complaints by aggrieved, dissatisfied and disappointed customers swelling by the day. For some time now, such customers have been making heaps and heaps of complaints of poor services from the bank’s online portals in the hope of getting the bank to sit up and live up to its promise of quality service delivery. But it appears the more the complaints, the more indifferent and unconcerned the bank becomes.

The complaints are getting rampant by the day, prompting Techcabal, the respected online publication, to beam its searchlight on the complaints with a view to establishing their merits, or otherwise. Findings by Techcabal revealed an astonishing fact, which is that GTBank’s services on its online platforms – its app and the USSD – have since taken a nosedive, the reason the seemingly unending bashings are justified.

The company has several cases to prove what is fast becoming a trend with the bank, namely, the deteriorating services on its online platforms. Take the case of Mayowa, 32, who found himself in a quandary on April 29, 2021, when he could not pay for a 19 kilometer Uber ride because neither GTBank’s app which he had with him on his phone, nor the short code of *737# Hufunctioned. The thoroughly embarrassed and flustered gentleman could not reach his friend whom he had gone to visit in highbrow Park View, Ikoyi, Lagos, who could probably have saved him from the ugly situation, because the latter was locked in a management meeting and could, therefore, not take his call.

Mayowa’s case was not made any better by the fact that the Uber driver, who was growing understandably impatient, kept taking à querying looks at him, wondering what the hell he was up to.
But he could do nothing more than plead for the driver’s patience and understanding, while he struggled to free himself from the embarrassing situation in which his bank had put him.

Techcabal found that Mayowa’s case is not an isolated one. It is common among GTBank’s customers, many of whom have suffered several forms of inconveniences and lost opportunities as a result of the malfunctioning of the bank’s online platforms.

Apart from non-functioning of online apps, there are cases of monies debited at ATMs, even when they are not dispensed. In such cases, affected customers go through the equivalent of hell to get refunds. There are also cases of monies debited for online purchase of airtime, without the user’s phone being credited – something many customers describe as a scam. Attempts by the affected customer to make an official complaint would result in a back-and-forth conversation with Customer Service until the former gets frustrated enough to abandon the chase.
A common complaint by GTBank’s customers is the fact that while they do not receive transaction alerts on their phones, they are charged for the service regularly. Complaints to Customer Service always receive the regular response of promise to rectify the error, a promise that is never kept.

It is complaints galore by frustrated GTBank customers on Twitter, many of whom do not have kind words to say about the bank. Dr. Ameena, writing under the Twitter handle, @amkmusty, on March 22, 2021, asks: “What is going on @gtbank_help. I am fed up with you guys @gtbank. Everything is stressful. Why have I been experiencing this all evening? Now it’s CTII, no more EI50. I am starting to tire of your channels pi.twitter.com/cmLjiiEL.

Another customer, Precious Oye, with Twitter handle, @BarrypOye, on April 30, 2021, asks: “@gtbank, why is your bank frustrating customers? I have not been able to access my GT Mobile App for days now. And when money is sent to my account I don’t receive alert, be it SMS or Email alert. I recharged 1k few days ago, but my phone wasn’t credited”.
Yet another customer, Abbie, writing under the Twitter handle, @Abigailsluvv, on June 16, 2021, asks: “How can GTB be silent at a time like this? I know they can see the complaints. Do traditional banks no longer care about providing quality customer support and help? Tomorrow, they will still charge us a silly ‘convenience’ fee.”

Architect Oluwafemi Thomas Awofusi, wrote: “@gtbank, it’s really frustrating… I used the USSD to purchase N2,500 worth of credit for my Airtel line; I was debited and never got value. I called immediately and was told that, truly, the transaction was made and I was debited and should wait for 24 hours for reversal. I was dazed. And I needed that credit to subscribe. Had no option but to look for alternative. I did another USSD transaction of N1000 worth of credit; same thing happened. I called and complained after 30 great minutes of regrettable pure waste of time. Below is their response summary: ‘No record of N2500 transaction on credit which was confirmed earlier. The other N1000 transaction has another phone number for the number that purchased.’

Glory Waleru complains:  “I started having issues with GTBank like 2-3 years back now and it’s really been horrible. GTB transactions never give me a straightforward balance. They debit me at random and too many issues with her transact. In fact, GT, I tire for una long time”.

And for O. Sam Joshua: “GTB my bank experience is nuisance to mention as your long queue for solution with customer service is another toil of problem.”
Techcabal quotes a customer representative of GTBank as admitting that most of the complaints by customers in 2021 have centred on the USSD and mobile platforms, unexplicable SMS charges and One-Time Password (OTP) issues. “These are the recurring problems and complaints”, she said. “Just as any GTB customer; they will share some bitter experiences.”

Observers and industry watchers worry that GTBank may lose substantially the gains it recorded over many years of diligent pursuit of excellent service delivery, if nothing is done about its underperforming online portals that are attracting to it the ire of the same customers  that have stood by it over the years.
By Our Reporter