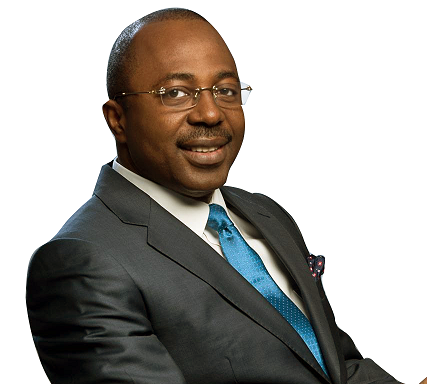 The competition in Nigeria’s banking industry is a fierce one, especially in an economy that is still struggling to come out of recession. It shouldn’t therefore be the best time for anybody to contemplate joining the fray as a fresher, when viewed against the background of stories that regularly make the rounds about banks that cannot be said to be in very sound health.

It would therefore take the lion-hearted – a professional who knows his onions – to accept an invitation to lead a new bank into a market that is dominated by big names that have been there for decades, some of who actually dictate the pace in the industry.

Elias Igbinakenzua fits the description of a lion heart and a core professional who knows his onions. It is the reason he accepted with excitement the challenge to lead a new financial institution into a banking industry that sometimes faces turbulence of all degrees. Igbinakenzua is the managing director and chief executive officer of Globus Bank, Nigeria’s latest deposit money bank that opened its doors for business on November 6, 2019.

He speaks about the new baby with the passion and optimism that only a professional of his standing can do. He describes Globus as a bank of the present generation – a fourth generation bank that has come into existence during the Fourth Revolution with a lot of promise, and with a lot of aspiration. What’s more – the new bank has a lot going for it. It is well capitalized. It has no legacy issues. It is digitalized to cope with the demands of technology. The bank has a lot of leverages it can ride on, with efficiency as its winning age. And unlike the big banks, it has started very slim, with no negative overhead loads to carry.

Igbinakenzua is not intimidated by the big names, nor is he bothered by any suggestion that he may not be able to compete with those that had been there long before now. He is aware of the fact that the big banks already see him as likely to encroach on their territory, based on his pedigree in the industry. That is one factor that will work for him, considering the rich experience he garnered working at the top echelon of those banks in the industry over a very long period.

But he says rather than see Globus Bank as a threat, the older banks should encourage the new baby to learn from them. His advice to the older players is for them to start thinking differently, with the warning that his bank has a ready response to the seeming war, with the battle cry: “It is time to lead the change”. He believes someone has to lead the change, and it does not matter if that leader is a big or small bank. What is an imperative is a change, because Nigerians deserve a better banking experience.

Igbinakenzua does not share the view that the market is saturated. He believes it is concentrated. He draws attention to the fact that only six banks control about 60 per cent of the market, which has made them very comfortable, with the danger of sliding into complacency.

If there is anything that has encouraged Igbinakenzua, it is the fact that over 40 per cent of Nigerians who should ordinarily have bank accounts do not have them, which means opportunities in the banking industry are huge and still waiting to be trapped. His target is not just the unbanked public, but also those in the formal banking net who his bank will use omni-channel and better banking experience to attract. While Globus Bank will strive to enable those without bank accounts to achieve financial inclusion, it will also encourage those already in the banking system to come through its doors with the use of unique banking products and services.

Igbinakenzua has spent the greater number of his years in the industry in corporate banking which has become his forte. But that is not to say that he will concentrate on that aspect of banking. He will explore other areas like commercial and retail banking, the latter of which his bank went digital from the day it opened its doors to the public. The aim is to ensure that its customers can access its services from whatever location they are.

He said his bank took time to asses and painstakingly analyze the banking industry and came out with the conclusion that retail is the future. That is why it considers that aspect of banking a priority. The bank is coming with a virtual account that would attract zero charges, as long as the account holder does not go to the bank premises.

Globus Bank was incorporated on March 6, 2019 and licensed by the Central Bank of Nigeria (CBN) to provide commercial banking services. It has entered the market with the aim of becoming Nigeria’s foremost digital bank that provides what it calls best-in-class solutions that are specifically designed to meet customers’ needs in the most timely manner.

The bank has a vision to be, “the referred financial services provider delivering endearing customer experience”, and is on a mission, “to serve our customers with passion and deliver superior value to all stakeholders leveraging technology and people in the most efficient and responsible manner”. Its service mantra is, “to be quick; to be safe; to be convenient”.

Globus has taken off as a regional bank, but has so far raised N30 billion, more than what is required (N25 billion) to be a national bank. Igbinakenzua says the bank will approach CBN before the year runs out for a national banking license.

It plans to hit N30 billion in the next 18 months.

The bank started business with 60 staff, and is hiring. With a branch expansion that is spreading fast, it would require a minimum of 20 staff for each branch. It plans to hire at least 80 staff for its branches by the end of December, 2019.

Igbinakenzua has been in the banking industry for over 25 years, 12 of which he held the position of executive director in Nigeria’s two biggest banks – eight and four years in Zenith and Access, respectively, with emphasis on corporate and investment banking.

A holder of a Bachelor of Science degree in Accounting from the University of Benin and an M. Sc. in Corporate Finance from the University of Liverpool in the United Kingdom, Igbinakenzua, who also has an MBA from the Enugu State University of Technology, trained in PricewaterhouseCoopers between 1989 and 1993. He qualified as a chartered accountant and became a Fellow of the Chartered Institute of Accountants of Nigeria.

He will rely on his wealth of experience in the industry and the strong support of a board that comprises accomplished professionals to take Globus Bank to great heights.