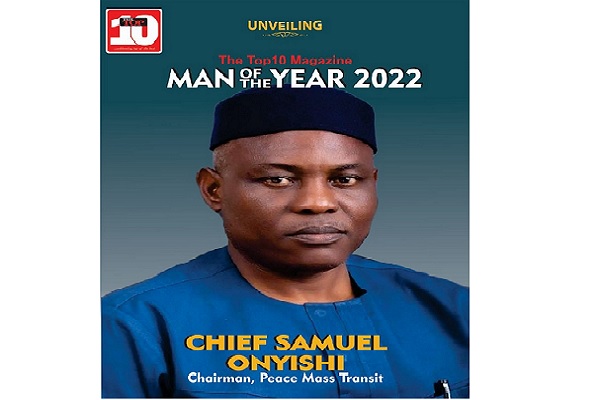 Chief Samuel Maduka Onyishi, Founder and Executive Chairman of Peace Group of Companies, has been named as The Top10 Magazine Man of the Year 2022.

He emerged the clear choice among over 90 other business tycoons in a rigorous selection process that involved various stages of screening.

Announcing Onyishi’s emergence as Man of the Year 2022, the Board of Editors of the Top10 Magazine said the Peace Mass Transit (PMT) boss was chosen because of the revolutionary touch he adds to every industry he enters into, beginning with transportation. He is currently extending his Midas’ touch to the education sector with the establishment of Sam Maduka University and the Maduka University College, Ekwegbe, Enugu State. While the college arm of the University has commenced operation, the University is billed to commence operations this year subject to final approval of the university by the National Universities Commission (NUC). The institutions are expected to tackle the problem of unemployment by training and producing graduates with orientation for self-employment and job creation.

Conveying the decision to bestow the award on Chief Onyishi, the management of Toncam Communications Limited, Publishers of the Top10 Magazine, said “it is our considered view that your transformation of the all-important transport sector through the introduction of passenger-friendly mini-bus mass transit system and the extension of similar ground-breaking innovations to another strategic sector – education – via your innovative vision, concepts and curricular of your twin educational institutions coming on stream demonstrate your commitment to Nigeria’s economic and social development worthy of commendation. This forms the basis of our management’s decision to accord you this special recognition as The Top10 Magazine Man of the Year, 2022.”

The Top10 Magazine Man of the Year award was instituted seven years ago as an annual award to recognize and honour an outstanding personality that has recorded milestone accomplishments in a given year in any relevant sector.

Chief Onyishi who had a very humble personal and business beginnings, has seen his fortunes rise to unimaginable heights. PMT which he started in 1995 as a student with only two buses, has over 3000 buses on the road today, and his business has grown into what is now known as the Peace Group of Companies, comprising Peace Quick Response Insurance Brokers; Peace Petroleum Limited; Peace Micro-finance Bank; Peace Express Service Limited; Peace Capital Market Limited (Stock Brokers); Dealers and Investment Advisers; Maduka Commercial and Futon International Limited, the sole importers of Peace Hiace Brand of vehicles; Peace Bureau de Change; Peace Aviation Services and PMT Beijing Trade Limited China.

Chief Onyishi is set to revolutionize the education sector, through his Sam Maduka University (SMU) and Maduka University College (MUC), both of which are programmed to pace setters in the Nigerian educational sector. MUC, located within the same premises of SMU at Ekwenge, Enugu State, is a secondary school system that was conceived to transcend the conventional academic narratives.

The new university, too, was designed to address the failings of the existing institutions, especially in the area of tackling unemployment problems in the country. It will make its graduates become employers of labour rather than being job seekers, irrespective of course of study.

Mr. Tony Iji, Publisher/Editor-In-Chief of The Top10 Magazine has hinted that ahead of the official presentation of the award, the magazine is putting together a special award edition to celebrate Chief Onyishi which will chronicle his winning strides, his exploits in the business world and what he and his Organization, the Peace Group of Companies, represents in the Nigerian economy.

Mr. Iji stated that the magazine had earlier unveiled Chief Onyishi few days ago as its 2022 Man of the Year on all its social media handles, which is the first phase of the programme. The second phase is the official media statement announcing his selection, while the third and final phase is the investiture and official presentation of Man of the year award to Chief Onyishi at The Top10 magazine Excellence Awards night 2022 slated for November this year