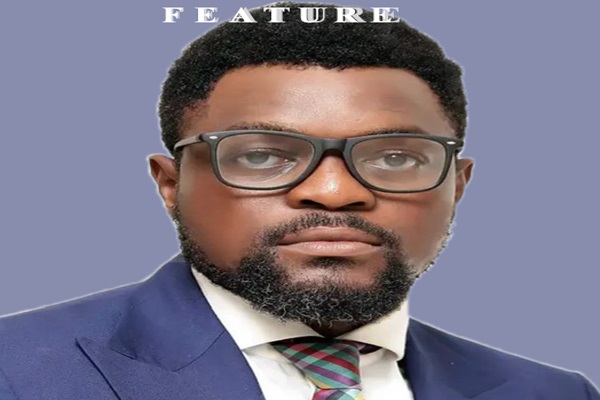 He is one of Nigeria’s hottest heads in the start-up and fundraising circuit at the moment. A multi-talented entrepreneur, David Lanre Messan, a mass communicator by training, who started out as an idea strategist, has today acquired outstanding expertise as a digital enterprise strategist, startup advisor and angel investor. Lately, he has become a political strategist and community mobiizer of international repute who is also deeply involved in academic engagements.

The founder and Chief Executive Officer of First Founders Inc., one of the fast-rising venture studios in Nigeria, is one of the most sought-after fundraisers in the tech startup ecosystem. David Lanre Messan, popularly known as DLM, has helped several early-stage startups to raise a total of over $10 million dollars from investors to build and scale their companies.

One of these startups is Syarpa, a Fintech company that is building the future of payments by leveraging digital assets solutions in Africa and around the world. In April, Syarpa closed a pre-seed round of $500k, with Messan and First Founders Inc. playing a significant role in that success.

Other early-stage companies that he has helped to raise investments for include but are not limited to, Ucard, a firm which is enabling digital commerce for offline retail markets.

He explains among other things, how he has helped startups in Nigeria and the way forward: “Many will agree that top players in the startup investment space are beginning to see the potential in the African startup ecosystem. Over the last two years, investment that came into the continent grew year-on-year. According to The Big Deal, in 2021, African startups raised about $4.33 billion in total estimated funding, from 820 deals. This is up 155% from 2020 where total funds raised totaled $1.65 billion. The number of deals in 2021 grew by 73% year-on-year (YoY) from 244 deals in 2020.

“The first quarter of this year, 2022, was a tough one for startup investments globally. Despite this, however, African startups managed to grow over 150% YoY, what has become its fourth consecutive quarter of 3-digit growth. What do figures like these suggest about the African startup ecosystem? We’ll leave you to answer that.

“Now, it is worth noting that fundraising isn’t as easy as these numbers may imply. It could take several months to successfully close a round as there are a lot that goes into the process. From putting together a great deck to pitching to investors, and going over the numbers and legalities, fundraising has a lot of moving pieces and requires patience, wits, and sometimes experience. For first time founders, a lot of this can quickly become overwhelming. But navigating the fundraising process is a lot less daunting when it is being done with guidance from experienced startup fundraisers.”

Messan is grounded in the knowledge and experience needed to shape up entrepreneurs’ businesses and craft the most suitable solutions possible. He has over 10 years of experience in entrepreneurship, business planning, ideas and strategy development, branding, marketing, operations, leadership and decision analysis. He has over 12 years’ experience in communications, marketing and executive business presentations in the private and public sectors.

He has spoken in over 50 conferences on key economic and social topics, major amongst them are the Grow Africa Forum, World Economic Forum on Africa, SHAPE Africa, etc. He has developed more than 100 thriving business ideas for companies, governments and corporations.

Messan has a solid academic background that has equipped him to run his talent management, digital marketing and business project management company.

Messan had an upbringing that helped him to become conceptually insight-driven, which is a cardinal characteristic of an idea strategist. He was taught to be contented but work hard – which exposed him to the power of curiosity and exploration from an early age.

“I developed myself to become an idea strategist by investing over 13,000 hours in the course of three years or so”, he said. He did more than the 10,000 hours that Malcolm Gladwell said will make one an expert in anything. “I learned the art of entrepreneurship from my mum and the science behind intelligence and application of knowledge from my father. These values have shaped me a great deal”, he said.

Messan’s career development journey was one of weathering the storm to the top. It has been a journey of trials and errors, learning, unlearning and relearning. But he knew what he wanted – self-development, which has quite underpinned his background. He did everything possible to seek knowledge; he read most of his father’s books, including ‘Think and Grow Rich’ by Napoleon Hill.

He took to hawking gala in traffic and, later, teaching in order to raise money to buy internet night browsing time at cybercafés. His purpose was to explore the new world of information and opportunities, to understand leadership and to become an idea strategist.

Messan has since expanded his service horizon to become a Community Organizer, scholar as well as digital and strategic political electioneering campaign manager.

As a scholar, he was recently selected as an academic visitor to the James Currey Society in cooperation with University of Oxford’s African Studies Center, a quest to hone a passionate career in creative writing, but this time, telling African Stories in the African way and manner.

The James Currey Society was founded by Dr Onyeka Nwelue, a Nigerian writer, publisher, and filmmaker who is a member of The Oxford Union Society, a debating society in the city of Oxford, England, whose membership is drawn primarily from University of Oxford. Through workshops, conferences, and residencies, the society, a nonprofit organization, is committed to studying the works done by James Currey.

James Currey is arguably the most influential person in the global recognition of African writers and literature. From 1967, he worked with Chinua Achebe on the African Writers’ Series (AWS). The books in the Series were instrumental in broadening the reach of African literature after the Second World War. He also played a big part in bringing Caribbean literature to a global audience.

AWS had been on for five years already and had published a total of 30 books before James came on board. But at the time he was leaving AWS, a total of 270 books had been published, a feat he was very much responsible for. Beyond studying the works of the literary icon, the society has other noble objectives.

Messan explains: “Our vision is for the James Currey Society/Abibiman Publishing to attain the status of being a conducive cultural and intellectual atmosphere in which both diaspora and continental African literary communities can meet to learn and exchange stories and literary experiences. A better understanding of the cultural similarities between peoples of African descent will be achieved through workshops, residencies, conferences, publishing, and institution of prizes.

“By constantly bringing together creatives involved in every facet of the writing and publishing industry a better understanding of the demands and expectations of the publishing industry on creatives will be achieved, and this will prove instrumental in starting off and sustaining a dynamic and thriving literary atmosphere within the African communities.

“Through the events and activities of the James Currey Society and Abibiman Publishing, scholars and literary creatives are brought into contact with the foundational work done by James Currey in establishing African writing in the consciousness of the global audience.”

As a Community Organizer, DLM serves as a community organizer for Harvard Business School Online. The school has published on its official website, an article on some of his works, recognizing his expertise as a strategist. His other international achievements include serving as a Scalabl Global Ambassador for Africa and International Partner and Senator for Nigeria with the World Business Angels Investors Forum. In 2011, DLM was selected as a pioneer global shaper of the World Economic Forum (WEF), where he served for five years and went on to become the community’s curator in Lagos and a member of the WEF on collaborations.

DLM deployed his expertise as a political campaign strategist during the 2019 Nigerian Presidential election, particularly in Atiku Abubakar’s presidential campaign. Atiku was the main rival of President Muhammadu Buhari who was running for a second term which he did win. DLM also worked as a Communications Consultant for the Lagos State Government under Babatunde Raji Fashola’s regime.

Messan’s exploits on these projects earned him international recognition and got him connected with United Kingdom’s Dr. Dianne Regisford, one of the Oxford councillorship hopefuls. A mutual friend, Kelvin Kellman, made the recommendation and Messan was appointed as Regisford’s campaign manager that will be working in the capacity of a Director, Strategist Communication and Digital Content Management.

DLM’s outstanding multi-disciplinary track record has earned him reconitions and accolades across board.

Messan was selected by MTV/Staying Alive Foundation in 2005 as a finalist and was rated one of the 100 best authors by the World Bank in 2006 out of 1,900 authors in the world for sharing his ideas on how he planned to solve community problems.

In 2007, he founded Green Yaggy, a project under his first company, Infinite Impact, aimed at helping to democratise the process of starting a business and access technology opportunities. Through the project, he impacted the lives of over 250 youth directly and another 5,000 indirectly – an accomplishment that earned him a recognition as African Business Leaders Forum (ABLF) 101 Young African Leader in 2007. In 2008, he won the LEAP Africa Nokia Top 10 Youth Leadership Award.

He has raised over $7 million for small businesses in Nigeria and Africa and has provided strategy for growth for over 250 businesses and start-ups in Nigeria. He has researched on digital enterprise integration for international magazines and has facilitated on strategy, fund raising, digital and business growth at various international platforms across several countries. In Nigeria, he has spoken on various enterprise topics at over 200 top workshops.

Messan calls on Nigeria to build an enterprising nation; he has his hands on deck to bring about an economy where young people will learn skills needed at the workplace or in the community as entrepreneurs. His advice: “If you are a young person looking for a job, do not apply only with your CV but apply with an outcome of what you can do directly to benefit the employer.

“I have had my fingers burnt many times. I have lost money. I have been bankrupted and in debt. I have had failed businesses. I have been betrayed. It is all part of the journey. One thing that never left me was the template to make another million”, he said.