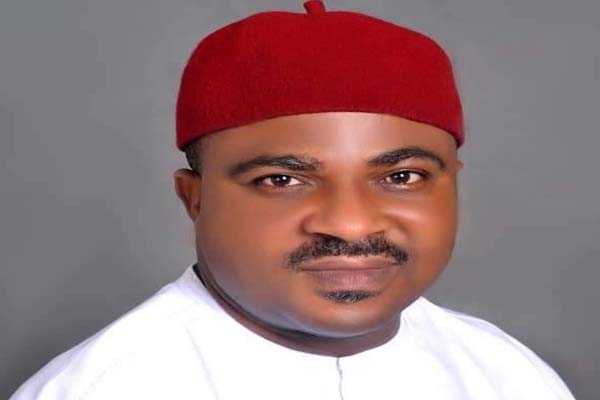 Hon. Barr. Orji Uchenna Orji is the Honourable Commissioner for Information, Ebonyi State. In a recent interview with Tony Iji, publisher of The Top10 Magazine, he shared the thoughts of his boss, Engr. Dave Umahi, the Executive Governor of Ebonyi State on some key saliant national issues and the reasons for the nationalistic disposition of his boss as a strong voice in promotion of national interest.

Q-Against the populist stance of some South-Eastern Politicians, Governor Dave Umahi is always known for promoting national interest, what informed his stance of being different from other regional champions?

By his character, family training, nature and inclination, he is a nationalistic leader and a bridge builder, he believes in one Nigeria. For us in Ebonyi, we refer to him as Azik of Nigeria because all his doings point to the fact that he wants a united Nigeria where there is love, peace, prosperity and tolerance for every culture. So, these are the virtues that informed his position to always stand for the nation in challenging times like this. When we had the issue of herdsmen attack, in some parts of the federation, he was made the chairman of a committee by the Federal Government to see how to make peace between the herdsmen and famers across the nation. He did that very well and submitted a very wonderful report which if implemented will end all of these problems in the country. When the Edo State Governor, Godwin Obaseki was going to have an issue with his party chairman, as a governor who believes in continuity, and fairness, Governor Umahi prophesied that no matter any party Obaseki goes to, being a fellow governor, whose constitution empowers to go for second term, that he will be praying for him, and that he can contest from anywhere (party) that he will win, and it came to past.

When the issue of Value Added Tax (VAT) came up, the governor’s thinking was that we should open our eyes as states of the federation and understand that all the fingers are not equal. We should have a central sharing point for VAT otherwise one state will dominate the entire revenue sharing generation. While some other states will be seen not to be viable. We are waiting for the Supreme Court pronouncement, but I want to tell you that there is wisdom in the position of the Governor, otherwise States like Benue State, without federal allocation cannot survive practically.

The idea of the governor is that before we talk about the issue of restructuring including taking of VAT by states, there should be a gradual restructuring process, where states that are good in agricultural produce and solid minerals should be empowered to go into irrigation and mechanization such as Ebonyi state. While in the case of States that have solid minerals, the issue of exploiting the solid minerals should be brought out from the exclusive list. Federal government should encourage the exploitation of solid minerals by individuals, and companies within states, so that states can benefit. These are the things that make states to be self-reliant. Again, the position that Mr. President is the father of Nigeria should not be ridiculed, it should be respected and given all the support. Sometimes ago, we had a president from the South and support was given. So, for us, we feel that Mr. President should be given all the support to deliver what God has destined him to deliver.

The governor is also a believer in the principle of fairness whereby the Presidency should be allowed to go round especially in the major blocs that came together to form the independence of Nigeria. His idea is that there is no zone where you cannot get the best hand. So, when you are talking about merit, you can get merit in the South-East, South-West and North-Central. But let us gradually go round so that there will be a sense of belonging. Given his antecedents in the governance process in Ebonyi state, he succeeded in collapsing the issues of dichotomy of zones in the State. You know Ebonyi was going to have the type of scenario that took place in Benue and Kogi States where one zone is in the majority.

One part that came from Enugu is twice the part that came from Abia, but he has been able to collapse that dichotomy. We are now looking at how to carry along each of the three zones without minding which side is in the majority. So, these are things he will work on if he has such opportunity and that has made him the father of all in Ebonyi state and we are beginning to realize that where we have differences in tongues, and languages, that the meeting point will be fairness, love and oneness. That is what the secret of the governor’s popular acceptance.

Q- Does his alleged presidential ambition have anything to do with his nationalistic standing?

I told you that from the beginning, and by training, the governor is very nationalistic. He is a believer of leadership. He has got good followership before he became a leader. The reason why I said this is that as a very rich deputy governor, he was very loyal to his boss. So, it is his character and part of his credentials as an individual. It is not for any ambition, he didn’t start today, the idea of ensuring leaders and elders, are respected started when he was a child.

Another point of reference is that the governor is the first in the history of the state to bring together all the former governors, and leaders and he has been carrying them along, up until now that some of them felt they should are in PDP as Lord of the manor, this explains the fact that he is nationalistic and he is someone who respects past leaders and establishments.

Q- His nationalistic standing has propelled him as one of the most electable individuals from the South-East for Presidency in 2023. How is he responding to that?

To God be the glory. God will take all the glory for everything.

Q- What is the governor’s contribution in restoring peace judging by the type of insecurity we have witnessed in the country, especially in the South-East?

Being the chairman of the South-East Governor’s forum, he has been working with his brother-governors to coordinate a lot of meetings aimed at engaging the actors in this agitation process, and insecurity issues. He has also been engaging traditional rulers, religious leaders, past and current leaders across board to see how to fight the scourge of insecurity in the zone.

The governor has always availed himself in all discussions at the national level in ensuring the end of insecurity and banditry in parts of the country. One of the decisions he has taken is to ensure that religious leaders and traditional rulers are integrated into the reconciliation process. He also helped in empowering necessary organizations including Ohanaeze Ndigbo, South-east Traditional Rulers Council (which incidentally someone from Ebonyi is the chairman) and the South-east Christian Association of Nigeria (CAN), which incidentally also someone from Ebonyi state is the chairman, to see how to galvanize them, and move together towards ending insecurity, and all the problems in the zone. But with fake news and hate speech, the way that the South-east wanted to be by the power of God is no longer the way it is going to be, and everything is gradually coming to a halt. Security agencies are further fortified to ensure that they tackle issues of insecurity in the zone.

Q- As someone who is known for promoting national interest, what will be his advice to the Federal Government in tackling insecurity in the South-East. What approach will you advise the government to adopt?

The best advice for me is peaceful engagement and discussing with the actors, appealing to their consciences and going by way of sensitization. The governor believes that militarization, and violent reaction are not the way to go, and that is why there is no declaration of state of emergency and war on a particular person or group of people in the South-east. I have told you about the case of Aguleri and Umuleri, in Anambra State, and other places, I know the regime that it happened and war was declared, and lots of lives were lost. I am sure because of his position on peaceful engagement, in which he has been talking and begging, offering olive branches including Amnesty. I think that is the best way to go coupled with what he knows best. In all of these insecurity issues, the governor has always led the people of Ebonyi and encouraged other people in parts of the South-east to go into prayers to seek the face of God. We have done it during the time of COVID-19 and ENDSARs and we succeeded. We are doing that in this time of IPOB and we believe that it will come to a halt any moment. Permit me to state here that part of the Governor’s virtue is the fact that he prays and sings like David. He is the only governor that convenes crusades, then invites men of God to come and pray. We make out time and spend hours to worship God and pray, I can tell you that is the actual secret of Ebonyi state government’s spendid performance

Q- What will be the advice of the governor to secessionist leaders like Nnamdi Kanu and others?

His advice has always been that agitation no matter how apt and germane they are, should not be done violently. We have had cases of agitation, even families, husbands and wives agitate, but in all we must know that we are one people. There is no form of agitation that will justify killing, destruction of public or private property, economy and the future of the people. In all he has said that it is better to jaw-jaw than to war-war because war is nobody’s friend. In JP Clark poetry, Casualties, he said it is not only those that started war, it is well out of it, it is not even those that are the actors that it is well out of it, casualties include those that are abroad, whose parents and relatives are at home.

The governor is also giving message to our Igbo brothers living abroad who do not have an idea of what is happening, and they are fanning the embers of division, violence in South-East, criticizing Mr. President and the government of the day, without having a clear picture of what is happening, and realizing that Mr. President is not the course of unemployment, insecurity, and underdevelopment. These things started long before the President came on board, before the last regime was winding up, Boko Haram was almost entering Aso rock, and wreaking havoc in Abuja, I am sure the situation is better now. Before he came on board, agriculture was in shambles, there was much reliance on importation. But the present administration of Buhari has done a lot to enhance agricultural development to reduce importation and increase exportation propensities in the administration. So, the governor’s thinking is that our brothers and sisters living abroad, especially those that are fanning these embers of division should think twice, and that is the way to go, the path Nnamdi Azikwe did. Nnamdi Azikwe understood the stake the South-East had in the creation of Nigeria, so we cannot afford to disintegrate or go to another country, other than Nigeria. We have said that the collective existence of Nigeria is not negotiable, but the modalities are very negotiable and that is the position of our dear governor.