Dr. Bashir Jamoh is marking his first one year in office as the Director General and Chief Executive Officer of the Nigerian Maritime Administration and Safety Agency (NIMASA) with a score card that many agree is indicative of what should be expected in his second year. That is no surprise, if it is considered that he assumed office as one of the most qualified for the job of running the agency with the primary responsibility to manage Nigeria’s maritime environment and keep it secure and safe for seaborne component, which is said to account for about 60 per cent of world trade.

Jamoh took office when the Coronavirus was assuming the status of a global pandemic that would, in later months, literally cripple economies around the world. His first action was to issue guidelines to vessels that were coming into Nigeria on measures that would ensure they did not bring the virus into the country. NIMASA was the first maritime agency in Africa to issue such guidelines. He also ensured dockworkers and seafarers were designated as essential workers. The purpose was to ensure that a vital sector of the nation’s economy was kept running during the lockdown, since there was still some level of trade among countries, even as the virus was raging.

The first bold move by NIMASA under Jamoh to keep the nation’s waterways safe and secure was implementation of the Suppression of Piracy and Other Maritime Offences (SPOMO) Act, which was signed by President Muhammadu Buhari on June 24, 2019. The law seeks to stem the menace of piracy and other crimes in Nigeria’s waterways and Exclusive Economic Zone (EEZ), with specific prescriptions for the punishment of offenders, such as jail terms of between 15 years and life imprisonment, as well as fines ranging from N50 million to N500 million, for individuals and corporate organizations, respectively. The law has sent a strong signal to the international community that Nigeria is ready to address the problem of insecurity in its maritime environment.  It is the first anti-piracy law of its kind in the Gulf of Guinea.

The importance of this law must be viewed against the background of the fact that incessant cases of piracy and robbery in Nigeria’s waterways have been an issue of major global concern. This has seen the country’s maritime environment, up to the Gulf of Guinea, being designated the most unsafe in the world. Implementation of the new law won the applause of the International Maritime Organization (IMO), which lauded the federal government for taking the concrete step of tackling a problem that had seemed intractable for a long time.

Jamoh brought a breath of fresh air into the operations of NIMASA, stepping up collaborative efforts with other security agencies for the purpose of keeping criminals off the country’s waterways. The collaboration involves intelligence sharing between NIMASA, using the Command, Communications, Computers and Intelligence Centre (C4i) of its Deep Blue Project (of which 85 per cent has been completed) and the Nigerian Navy’s Falcon Eye on a 24-hour, round-the-clock basis to track down criminals in the waterway. The Deep Blue Project, which is also known as the Integrated National Security and Waterways Protection Infrastructure, is put in place to tackle insecurity and all forms of criminality in the country’s waterways.

The collaboration yielded results in a number of arrests that were made last year. For instance, within the first two months of assumption of office, the collaboration paid off when a joint operation involving NIMASA, Navy and the Police foiled an attack on a Chinese fishing trawler, leading to the arrest of 10 pirates. And by the third month of operation, 27 alleged pirates had been in the net of the joint security agencies. From 2016 up to the time the arrests were made, there had been no single arrest regarding the activities of pirates.

Jamoh says arrangements are almost completed for NIMASA to deploy its floating dock to the Continental Shipyard owned by the Nigerian Ports Authority (NPA) under the Public-Private Partnership (PPP). International oil companies operating in the country have shown interest in dry-docking their ships at the facility, an arrangement that would generate over N1 billion annually for NIMASA, while creating employment for over 350 people. The floating dock will save a lot of foreign exchange for the country, and also provide facilities for sea-time training of cadets in mechanical and electrical engineering.

An issue that had remained a sore point in maritime circles was inability of vessel owners to access the Cabotage Vessels Financing Fund (CVFF), many years after it should have been operational. The appointment of Jamoh as chairman of the CVEE Disbursement Committee by Rotimi Amaechi, Minister for Transportation, last year, signaled the end of the long wait for vessel owners to begin to access the fund. Disbursement of the first leg of the fund was expected to commence in October, last year.

The last one year has been a period for foundation laying by Jamoh, regarding his plan to re-position NIMASA. But that hasn’t been without some significant achievements that point the direction of where he is leading the agency. For instance, his strategies and the structures he has put in place to address the security challenges in Nigeria’s waterways have not gone unnoticed, even outside the country.

Last year, Kitack Lim, Secretary General of the IMO, personally conveyed to Jamoh the United Nation’s commendation of his bold efforts at tackling insecurity in the country’s waterways. More commendations are expected this year as some of those strategies and programmes begin to yield more fruits.

The right man for the job

Jamoh’s appointment as director general of NIMASA is not one of those political appointments that are made as compensation for party loyalty, or sharing of the national cake. It was one appointment that was hailed in maritime quarters as arguably the best and most appropriate since the establishment of the agency. His fitness for the job stems from the fact besides being educationally and professionally equipped, he rose through the ranks in NIMASA to get to the pinnacle. His credentials are not only impressive, but quite intimidating.

He has attended several courses in leadership and management at renowned institutions around the world, including Harvard University, the United States; Oxford University and Cambridge, both in the United Kingdom; International Training Centre of the International Labour Organization, Turin, Italy and Institute of Public Private Partnership, Washington DC, USA. Others are the International Law Institute and the Institute for Leadership and Development for the Public Good, both in the USA; Royal Institute of Public Administration, UK and World maritime University, Sweden.

Jamoh is an administrator of no mean standing, and has organized and facilitated leadership training programmes in the UK, USA, UAE, South Africa, Brazil, Malaysia and Sweden. He is considered an expert in maritime human capacity building, PPP development, as well as shipping management and international trade. It was an attestation of the high regard and standing he enjoys in maritime circles that a dinner organized to honour him on his appointment was graced by maritime heavyweights in the country. 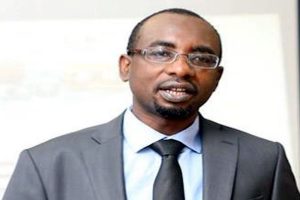 Kashiwu Inuwa: The first at the saddle at NITDA