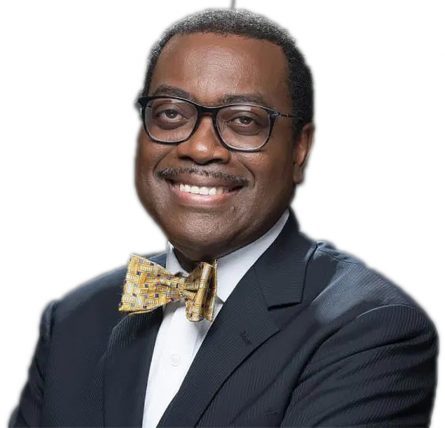 Dr. Akinwunmi Adesina is president of African Development Bank (AfDB) Group and has been on the saddle of the bank’s leadership since 2015. Since then he has pursued strategic goals and growth initiatives anchored on his High 5 Strategy’. These are expressed as light up and power Africa, feed Africa, industrialize Africa, integrate Africa and improve the quality of life for the people of Africa.

He has moved Africa in the key development fronts identified in the strategic agenda. AfDB has a bold agenda of delivering universal access to power in Africa in ten years. The targets are the 645 million Africans who lack access to electricity.

According to AfDB’s estimates, up 4.4 million were connected to electricity in 2017, 8.5 million people received support in the agricultural activity in the same year and 14 million people benefited from infrastructural investments in the transportation sector across the continent.

Adesina has been a motivating force to the African youth into entrepreneurship, particularly in the field of agriculture. His plan is to develop the next generation of leaders with a new mindset of modern value-chain driven agricultural enterprise. This, he believes is a strategic imperative for unlocking the fullness of the wealth of African economies.

As head of the foremost development financial institution in Africa, Adesina is passionate about mobilizing resources from far and near to end poverty in Africa.“My life is only worth living to the extent to which it helps to lift millions out of poverty into wealth. For three decades that’s been my passion. Development must be done with dignity”, he said.

In pursuit of this mission, he has built strategic alliances and partnerships across the world, cutting across governments, private sector and civil society.

His mission is to change the status of Africa from ‘a museum for poverty’ to a ‘place of wealth’. His strategy is mobilizing billions of dollars of development capital, making investment to take the place of aids in the development functions of Africa’s economies.

He is pursuing the development targets with a deep sense of urgency in view of the rapidly growing population of young people in Africa. For him, it is quite imperative to accelerate economic growth in order to match the growing population with new job opportunities. His goal is to create 25 million jobs in ten years mostly in the agricultural sector.

Adesina’s drive for agricultural innovation in Africa is to achieve food security for millions of people throughout the African continent. He is doing everything possible to help African countries transform their agricultural sectors with a view to diversifying their economies, creating jobs and eradicating food insecurity across he continent.

His emphasis on agriculture has a deep root from his background. He was born into a family of smallholder farmers, where the reality of rural poverty pushed him towards a vision of unlocking the potential of Africa’s agriculture to feed its people and the world.

Adesina later joined the Rockefeller Foundation Agricultural Sciences where he was in charge of developing innovative approaches for reaching poor farmers in the remotest areas of Africa with improved agricultural technologies. He was part of the development of a model called “The Agro-Dealers Network”, which consists of a massive rural network of small village shops that taught modern agricultural techniques and sold seed varieties and fertilizers to farmers.

The initiative paid off. Modern farm inputs became readily available to farmers, millions of farmers were supported and the result was significant increases in food production. At Rockefeller Foundation, he led Africa to agree on the agenda to eradicate hunger in Africa by 2030.

This is in his conviction that Africa desperately needed to spark a revolution in agricultural techniques to increase food production of smallholder farmers. The summit is one of the high-level meetings in Africa’s history to focus on tackling Africa’s food challenges.

In 2015, he proceeded on the mission of building what he termed the greatest infrastructure – grey matter infrastructure through his African Leaders for Nutrition initiative. With the initiative, Adesina has been at the forefront of eradicating malnutrition and poverty in Africa through agriculture.

He has been behind a number of programmes and initiatives designed to build a bright future for Africa. He pioneered major transformations in agriculture, such as expansion of food production using high yielding technologies, introduction of policies to support farmers’ access to technologies at scale and increased availability of credit facilities to millions of smallholder farmers.

Other initiatives include attracting private investments to the agricultural sector, rooting out corrupt elements in fertilizer distribution and assisting in the establishment of major agricultural policies for Africa’s green revolution.

Adesina also developed an innovative financing system, which enhanced bank lending to smallholder farmers. This is to empower them to break free from the cycle of poverty through enhanced operating capacity. The scheme leveraged $100 million funding that has contributed in bringing agricultural innovation to smallholder farmers across African countries.

For instance, in Uganda, the country’s central bank provided loans to farmers growing bananas, using $500,000 from Rockefeller Foundation’s Program-Related Investment portfolio. In Kenya, Equity Bank, which is the country’s largest bank, launched a risk sharing facility that leveraged $50 million in financing for tens of thousands of smallholder farmers.

In Nigeria, Adesina worked with the Central Bank of Nigeria to establish a $300 million risk sharing facility to de-risk lending by commercial banks to agriculture. He successfully leveraged $3 billion in lending commitments under the scheme.

Based on his achievements, he was appointed minister of agriculture and rural development in in Nigeria in 2011. During his term, he boosted food production by an additional 21 million metric tons over four years and attracted $5.6 billion in private-sector investments. He geared up agricultural production in the country with his introduction of the E-Wallet System.

Under the arrangement, agricultural inputs and subsidized electronic vouchers were provided to farmers for purchases of fertilizer and seed varieties directly from agro-dealers in lieu of cash. This is Adesina’s innovative approach that ended 40 years of corruption in the government-controlled fertilizer distribution system in Nigeria.

The use of improved seed varieties in rice, maize and wheat production multiplied crop yields per hectare. The number of seed companies soared with the increased demand within just four years and the ultimate purpose was realized, which is the transformation of the lives of 14.5 million farmers and their families.

The success purred global financial institutions such as the World Bank and other multilateral and bilateral development finance institutions to apply the model to support the scaling up of the programmes in other African countries and beyond.