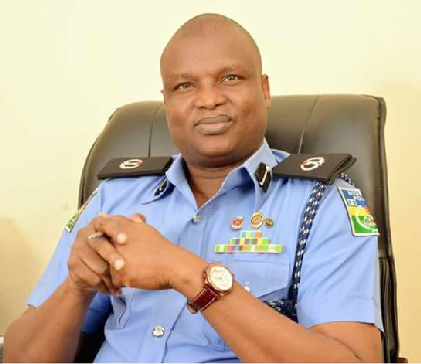 He goes by several sobriquets – Super Cop, Jack Bauer, The Sheriff, etc. Interestingly, he did not give himself any of the nicknames. Nigerians did – in recognition of what has come to be seen as his specialty in bursting crimes that seem to defy solutions.

Abba Kyari is just 42 and barely 18 years old in the Nigerian Police. But his name rings a bell perhaps louder than those of others that had been in the force longer than him and many ranks his superior. To Nigerians in different parts of the country, his name is sweet music whenever it is mentioned, but to those that live in the underworld, the name strikes fear.

Abba Kyari, Nigeria’s youngest deputy commissioner of police, is the man the force literally relies on to crack knotty, high profile crimes that range from armed robbery to kidnappings and murders. He is called in wherever and whenever criminals appear to have the upper hand. And he never disappoints.

He busts crime rings and gets seemingly elusive kingpins arrested with so much ease, no matter the duration of the manhunt, that there are many who swear his exploits are beyond the ordinary. Some people believe he works with the aid of charms to succeed where other policemen fail, especially with the pinpoint accuracy with which he smokes out presumably invincible crime lords from their hideouts.

Abba Kyari laughs off such beliefs. “Many people believe that I use charms, but I do not use any charms”, he says. “For instance, when we arrested Ndagi about 14 years ago, there was a rumour that before I was able to arrest him, I travelled to my village in Maiduguri to get charms to help me make the arrest. They said it took me seven days to have the charms, and that immediately I left Maiduguri I got him arrested. I laughed because nothing like that happened, and I did not even visit my village three months before the arrest”.

He has a string of successes in different parts of the country as attestation of the general belief that he is the Sheriff who gets into town and changes the game in crime fighting.

Abba Kyari was instrumental to the arrest of the kidnappers of the mother of former minister of finance, Dr. (Mrs.) Ngozi Okonjo-Iweala, effectively ending the reign of terror of a deadly gang that laid siege to Rivers, Delta and Edo states over a long time. The gang had killed a former deputy governor of Anambra State and kidnapped the wife of a sitting Supreme Court judge.

He had a hand in the arrest of Abiodun Egunjobi, alias Godogodo, a notorious armed robber who made the South West his footstool, who confessed, upon arrest alongside some of his gang members, to have killed more than 150 people, including 50 policemen, over a 10-year escapade.

He busted the robbery ring led by the general overseer of an Ejigbo, Lagos-based church, which staged a daring operation at the Murtala Muhammed International Airport. The gang had been operating with ease in Ogun, Kwara and Rivers states.

Abba Kyari was instrumental to the arrest of Benjamin Osinachi, a.k.a. China, and his kidnapping gang that was based in Ghana but operated in Nigeria. The gang’s kidnap victims included a sitting high court judge, a sitting local government chairman and many expatriates.

He was instrumental to the arrest of a gang that kidnapped a cousin of Africa’s richest man, Aliko Dangote, as well as the group that kidnapped Dickson Lee, a British citizen on the International Airport Road shortly after the latter arrived Nigeria.

He led the crack team that arrested the nanny who made the headlines by kidnapping, in one fell swoop, three children belonging to the same parents, “the Orekoya boys”, just three days after he got on the case. He also led the rescue of three female students kidnapped from Babington Seminary, Ikorodu, Lagos, as well as the arrest of the kidnappers, in March, 2016.

Abba Kyari had a hand in the gunning down of arguably Nigeria’s deadliest kidnap kingpin, Henry Chibueze, a.k.a. Vampire, who reportedly killed more than 200 people, including his own girlfriend, in the course of his kidnapping exploits. The gang leader met his Waterloo barely one month after his lieutenants rescued him in a movie-like operation in broad daylight in the premises of the Owerri High Court where he was taken for trial.

His biggest catch was, perhaps, the arrest of Chukwudimeme Onwuamadike, alias Evans, the alleged billionaire kidnapper who collected ransom only in foreign currency.

While growing up, Abba Kyari had either of two professions in mind. He dreamt of being a pilot or a police officer. He later realized that the process of becoming a pilot, especially the cost of training, was something he could not afford, growing up in a polygamous home where he had to fend for himself and other siblings at a very young age. He opted for the police force.

He began to lay the foundation for his career by indulging quite early in reading of detective novels and magazines, with strong addiction to seeing detective movies. As the eldest son in a family of 30 children, the lot fell on him to regularly handle disputes involving his siblings. It was a role he found quite easy to perform, thanks to the little knowledge a gathered from his indulgence in detective novels and movies. “I started my detective work in my house”, Abba Kyari recalls. “I developed an interest in always finding out the truth in any case I was handling, and that was how it started for me”.

After his secondary education, he gained admission into the University of Maiduguri where he studied Geography. Life as a student wasn’t an easy one, as he had to work to pay his way through university. He did this by operating a commercial motorcycle business any time he wasn’t in class attending lectures. This left him with no time for such luxuries as what is considered normal campus life, which includes socials. He had time for only two things – his studies and his business. The business made it possible for him not just to pay his school, but also to provide for about nine siblings whose mothers, including his own, had left his father when they were all very young.

Abba Kyari did his mandatory National Youth Service Corps programme in Akwa Ibom State in 1998 upon completion of his university education, and joined the police force as a cadet assistant superintendent of police in 2000. He switched to the Police Mobile Force in 2005 and served for five years before being posted to the Lagos Police Command, where he was deployed as the second in command at the Special Armed Robbery Squad (SARS). He assumed command of the squad on January 15, 2011.

Abba Kyari has a string of awards under his belt to show for his gallantry.  These include a special award from the wife of the president, Aisha Buhari; IGP Commendation Award for Courage 2012, 2013, 2014; Governor’s Award for Gallantry, Leadership and Service Excellence 2011, 2012, 2013; Commissioner of Police Award for Courage 2011; Best Anti-crime Police Officer in West Africa, by Security Watch and Star Award from CRAN 2011, 2012, 2013, 2014.

He is married with five children.